The Squeebles, one year

As of today, Ingrid and Rupert have been with us now for one whole year. And they have definitely made our lives (and our house) more interesting and exciting. 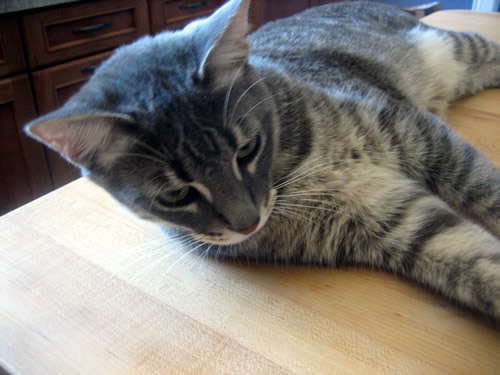 Rupert is the classic Little Boy in personality (think Calvin, from Calvin and Hobbes, or perhaps Dennis the Menace, in feline form). He is quite possibly the most active, curious little cat I have ever met, and he has only slowed down minutely since we got him. He is still determined to get into / on top of / underneath / behind anything and everything. He has managed to lock himself into rooms several times, despite the placement of heavy doorstops (we live in hope he will grow out of that eventually). He still remains firmly convinced that some day, Azzie will be his friend (Azzie still would prefer that Rupert go away and leave him alone, but he is slowly wearing down – mainly because Rupert pretty much defines the word ‘persistent’). He is extremely friendly and is sure that everyone who enters the house is there solely to entertain him. He has absolutely no fear (of heights, of the unknown, of being whapped by Checkers), and we are sometimes not really kidding when we joke that he is immune to trauma. He always has something to say and cracks us up on a daily basis, and it’s hard to imagine the house without him (although we often agree that we are very, very glad that we did not also adopt his brother who was as high energy as he is, because the house would not have survived). 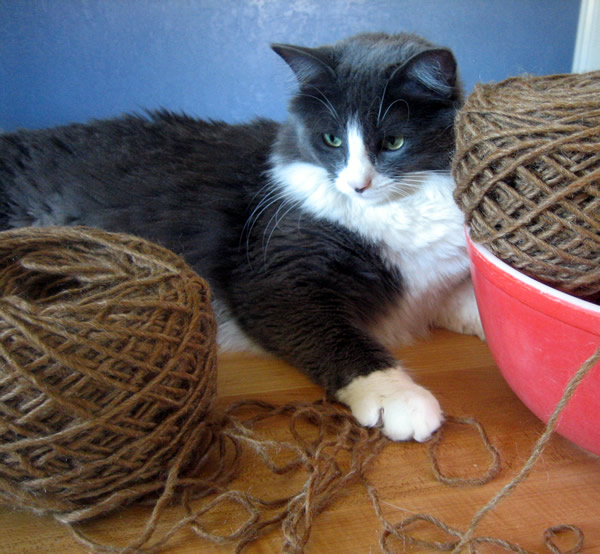 Ingrid is a goofy little delight. She is still a bit shyer than her brother, and is more likely to growl when strangers come up the steps to the front door (she growls and runs away. Amusingly, since the strangers always eventually leave, this has convinced her that this ‘scary’ behavior *works*). She has yet to meet a vegetable she doesn’t adore, and we have long since given up trying to keep her away from the produce we bring in from the garden (in fact, this morning, she was helping herself to a fresh tomato, and she has been known to steal lettuce and gnaw on squash). She is all-over-floof, of the softest variety, and is not the slightest bit graceful. She often flops, without warning, to roll onto her back, and her favorite sleeping position is against a wall/bookcase/sofa cushion so that she can sprawl upside down. She purrs at the slightest touch, and has the goofiest little whine, which she employs quite often (usually while flopped on the ground, because we are then supposed to come to *her*, and not the other way around). She still carries Sock around (small stuffed sock toy), although we are a big saddened that it is no longer her favorite (currently the favorite toy is either a cherry tomato or a baby bell pepper – she’s going to be really disappointed when those are no longer in season). She makes us laugh, all the time.

It’s been a wonderful first year with these two little fuzzy goofballs (even though sometimes it’s still a little hard to remember what we had to lose in order for them to join the family). Looking forward to many, many more.