Last summer at some point I found some kind of vague schedule for when you’re supposed to be trimming and pruning certain things in your garden. Technically, January was when I was supposed to hack back the grape vine, and February is when I am supposed to be pruning the citrus. I have no idea if this is correct or not, but I figured I might as well go with it. And hey, considering that so far the grapevine has thrived on complete and utter neglect, giving it a bit of a chop couldn’t do much to hurt it.

So I went out and cut away a couple big patches of the vine, as well as cutting down some of the stupid pecan tree saplings that have been sprouting up amid the giant tangle that happens when you leave a grapevine untended for 3+ years (there is a pecan tree in the neighborhood, and the squirrels diligently bury the nuts all over the place, such that I am forever having to yank up tiny little pecan trees from everything. Years from now, when the zombie apocalypse is over and the neighborhood is deserted, it will morph into a healthy pecan orchard, and this is why). I also took a whack at the two citrus trees in the front yard. I have been hesitant to do much with them because they’re small yet, and while any plant in our yard must be hardy enough to survive benign neglect, these things definitely needed some help. They now look more like trees and less like unsightly bushes, so here’s hoping I didn’t completely kill them in the process. 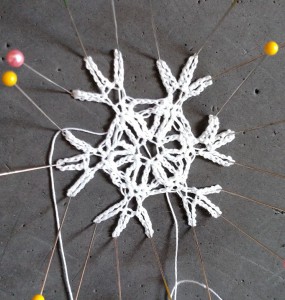 When I started working on it, I was struck right away by the fact that, unlike every other snowflake pattern in the book so far, this one did *not* start with me chaining 6 stitches and joining them into a circle. At first I thought perhaps this was an error, but then I read the next row and it didn’t make sense if there was supposed to be a circle to begin things with, and I reminded myself that this book has been out a long time, so I took a deep breath and just plunged right in, and eventually it sort of started to make sense.

Oh look. It’s October already. And this year that means things get a radical shift in the kitchen. Okay, maybe not all that radical, since we weren’t doing too horribly bad about things beforehand, but this year, Richard and I are taking part in the October Unprocessed challenge. Granted, the word ‘unprocessed’ is a bit misleading for this challenge, since just the act of chopping or cooking is by its very nature ‘processing’. But the point of the challenge is that if it’s not something that the average person could make at home, or the ingredients list includes things that were manufactured in a chemistry lab, it should be avoided.

So far, we’re not doing too badly, although it’s only been two days yet, and weekend days are a lot different than week days when it comes to having time to cook. Of course it helps that yesterday we made our yearly pilgrimage up to Apple Hill, so pretty much the only things we ate all day were made of apples, and were made by hand at the farms (shh, we’re ignoring the ice cream on the pie). Today I made bread and for dinner we made a huge pot of dal. We followed that recipe pretty closely, but added a chopped zucchini (because the monster zucchini plant of doom is STILL producing, for crying out loud). As an aside, should you be interested in that recipe, bear in mind that it makes a LOT. Unless you have a large and hungry family, or are intending to serve this to a crowd, I’d recommend halving the recipe, at a minimum. I ended up stashing about half of it in the freezer, because while it turned out really delicious, there are only so many days in a row either of us is willing to eat leftovers of something before we get completely sick of it (and I suspect that given the amount left that *didn’t* end up in the freezer, we’re going to be bringing leftover dal for lunch all this coming week).

I know we’ll be running into a few interesting surprises as we go through this month. I hit the first one bright and early yesterday morning, when I went to set up my first cup of coffee of the day, took a look at the ingredients in the flavored creamer that I always use, and realized that it did not meet the criteria for ‘unprocessed’ by any stretch of the imagination. Luckily I stumbled across a blog post from someone else who’s doing the challenge who ran into exactly the same problem, and she linked to these recipes. This afternoon I made a batch of the Cinnamon Strudel (which smells just like a freshly baked cinnamon roll) and when I’m done with that, I think I’ll give the French vanilla a try. In the meantime, if anyone stumbles across a recipe to make my own hazelnut creamer, that meets the criteria for the Unprocessed Challenge, let me know!

As I noted above, the zucchini plant is still chugging along, although at a thankfully slower pace than earlier in the summer. The tomatoes are also showing signs of slowing down, although based on the number of tomatoes we put in, ‘slowing down’ still results in me filling the freezer and having to process another dozen or so pints of sauce every few weeks. With what’s left from last summer, and everything I’ve put up this summer, we’re not going to have to buy tomato sauce (or pizza sauce, or marinara sauce) for a good long time. The cucumber and peppers, however, have hit their end point, so this morning we spent about half an hour doing some clean-up, hacking back the worst of the blackberry vines and pulling up an embarrassingly large number of weeds. Then we put in the first batch of cold-weather plants – lettuce, sugar snap peas, scallions, and spinach. Later on, I’ll get some beans and shelling peas started, and maybe even try carrots again, and maybe, if we’re really lucky, the snail and slug population in the neighborhood will take a drastic turn for the worse and we might actually get a decent winter crop.

It’s been kind of a crazy year so far, when it comes to the weather. First of all, it was a pretty soggy winter, and then the soggy kept dragging on and on, all through May, and even into June. We put the veggies in in late May, and one week later a massive hailstorm came through and pummeled everything. Luckily we only lost one melon plant – everything else somehow survived, scarred but otherwise unbowed. Then it rained again, and rained some more, and all those little veggie plants went WHEE and decided to see just how huge they could grow. Toss in another huge rainstorm just this past week (complete with thunder so loud it was rattling the windows all across town) and this is what you end up with. 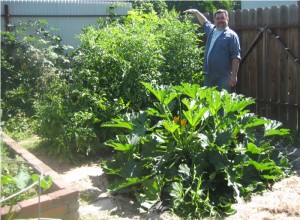 The giant beast you see in front of Richard is our zucchini plant. Our ONE SINGLE SOLITARY zucchini plant, which has so far been producing as many (if not more) squash than the three summer squash plants we had last summer combined. Let’s just say that the dehydrator is going to be getting a real workout this summer.

The messy hedge wall to Richard’s left is made up of three tomato plants. Notice how they are TALLER than Richard? This is what happens when tomatoes and rain storms mix. The tomatoes are so dense at this point that I am not entirely sure how we are going to manage to actually harvest anything – it’s next to impossible to reach in and around the giant tangle of branches. I can see a whole lot of green tomatoes, lurking in there, though, so if the current nasty-hot weather we’re having holds, I suspect we’re going to be swimming in giant piles of beautiful red fruit soon. At that point, it might end up being a battle between the zucchini and the tomatoes as to who can overwhelm us first. Because what you do not see in this picture is the other huge, messy hedge wall behind me (I’m the one taking the picture), made up of five additional tomato plants, all tangled together and loaded with unripe fruit and massive branches that are trying to reach across the path and take out the cucumber. Oh, and let us not forget the blackberries, which are that big tangled mess in the back of the picture, behind the wall of tomatoes, since they are doing their best to take over the potato bed and make a break for the pomegranate tree, and the only reason we have not gone at them with clippers is that they are still (yes, still) producing. Phew. 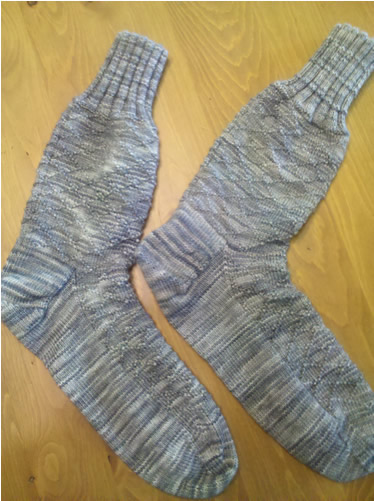 Pattern: Gentlemen’s Sock – from Knitting Vintage Socks. Made for Richard. This is sock pair #2 completed for the year (yes, I am aware that I am 3 pairs behind schedule). 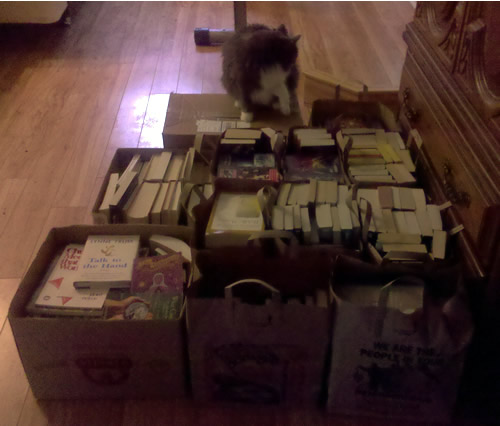 The results of a massive book purge: 8 grocery sacks, and 3 boxes, stuffed with books. This filled the back of the Prius completely, yet is only a small fraction of what we still own. We dropped them off at the Friends of the Library used book store this morning, and returned with only 6 ‘new’ ones (one of which is being sent off to someone else). 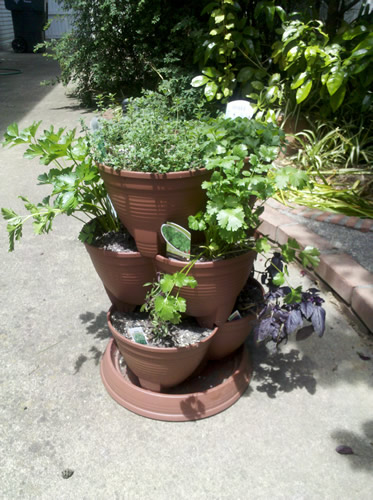 Stacking herb garden. There are three basils on the bottom. Naturally those are the ones the snails are decimating. Stupid snails (I hope you like Sluggo). 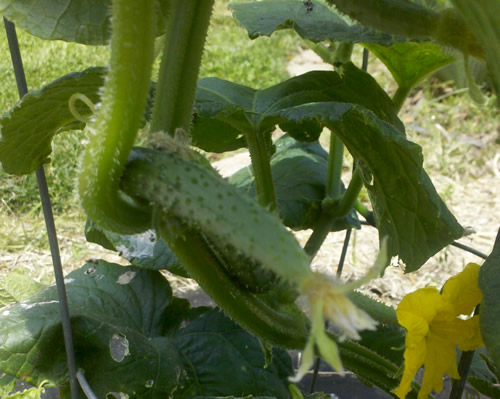 Tiny baby cucumbers. There’s about half a dozen on the plant so far. 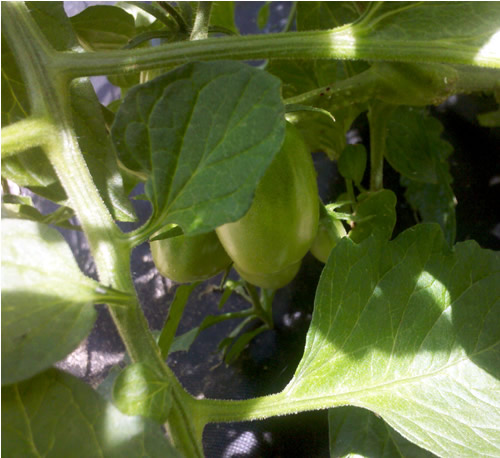 Baby tomatoes. We put in twice as many tomatoes this year. I am hoping that I do not regret this.