So, I was right – the 100,000 mile check-up did include another ‘ouch’ for my car. Turns out a cracked drive belt can be expensive. Ugh. But I am consoling myself that, all things considered, the ‘major’ repairs on this car have been few and far between, so it isn’t as bad as it could have been. We’ll see if I can keep it going for another 100,000 miles (although I suspect it’ll take even longer than the first 100,000, since we do a lot less driving than we did when we first got it).

Aside from the wince-inducing auto maintenance, though, the week’s been a decent one. The box arrived for Kathy’s Take and Replace Swap, and even though I need more lace yarn and/or more sock yarn like I need another overly caffeinated turbo-cat (aka Rupert), I could not help myself, and took out these: 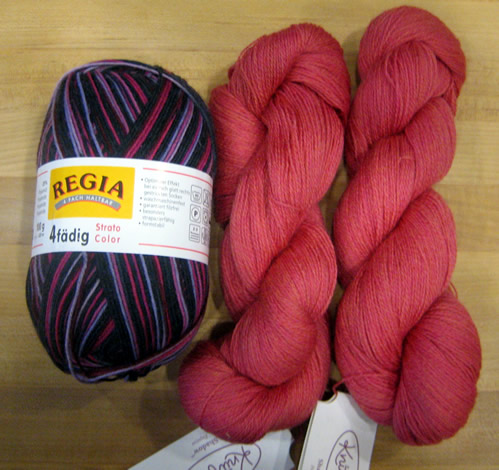 That’s two skeins of Knit Picks Shimmer in an absolutely gorgeous red, and a ball of self-patterning sock yarn. I have a laceweight drawer and a sockweight drawer in the paint-spattered old dresser I use for yarn storage, and they are both so full that it is almost impossible to stuff any more yarn into them, but…in the face of shiny new yarn, I am weak. At least with a Take-and-Replace swap, yarn in = yarn out, so total number of yarn skeins in the house didn’t change.

On the plus side, however, last night I did finish a pair of socks (plain stockinette ones, in purple Trekking XL), thereby fulfilling the Sock-Completion-Goal for January. And earlier this week, I handed a few sock pattern books to Richard and said ‘pick the ones you like’, so (using some of the sock yarn that ‘accidentally’ fell into my shopping basket at a yarn-shop-closing event a few weekends ago – ahem), Thursday night, I cast on for a new pair. I’m not holding my breath I’ll get these done by end of month, because Richard has large feet and I have other things I also need to be knitting in the meantime, but it at least gets me an early start for February.

Oh, and speaking of February, since she posted it to her blog, I can show you the thing I was frantically trying to finish up last weekend.

This is Coo and Coy, and you can get the pattern to make your own little duo here (just in time for Valentine’s Day!). 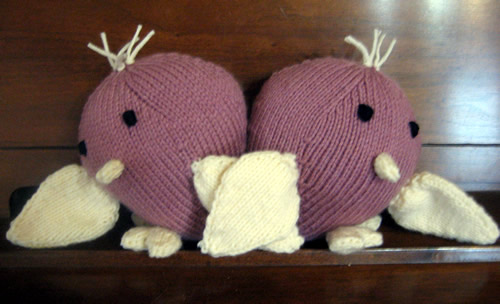