Nothing much happened today beyond going to work and knitting. So instead I shall tell you about this year’s Sisters Only Weekend, which actually happened back in July.

For those of you who are new to my little corner of the internet, my two sisters and I have been going away for a weekend (just us, no husbands and no kids) for 11 years now. We started it because we all live relatively far apart (one sister lives in a completely different state, and one sister lives a few hours’ drive away from me) and are all busy with our own lives and it was hard to try to keep in contact and maintain some sort of connection. Now, each year, the emails start flying back and forth in January, and we find something fun to do that is within a short drive or plane flight, and that can be done over a weekend. In years past, we’ve gone to Vegas,  rappelled into a cavern, wandered through pitch-black lava tunnels near Mount Saint Helen, and explored Sacramento on Segways. Each year we try to do something different, with the added caveat that the weekend has to include something a little out of the ordinary – a mandate which was started the first year, when on a whim the three of us did kareoke (something none of us had ever done before).

This year, my older sister and I flew up to Washington, my younger sister picked us up at the airport, and we all headed off to spend the entire weekend baking.

The baking part is not necessarily something new for all of us. My younger sister is actually a trained baker, and I do a lot of baking just because I really, really enjoy it. My older sister, however, hasn’t played with yeast quite as much as us (although we all grew up learning how to make bread from my mom), and we all figured whatever our initial skill level, it would be a lot of fun (and also delicious).

We got there a bit later than expected, since traffic on the freeway was all manner of rush-hour exciting, so we missed the first round of mixing up sponges for a lot of the doughs we’d be working with over the weekend. But we didn’t miss everything – once we’d dropped our suitcases off upstairs, we came immediately back down to the kitchen and were put to work mixing up whole wheat dough, and working on bagels, because we had a *lot* to get through over the weekend. The bread was baked that night, but we put all the bagels onto trays and then played refrigerator Tetris trying to get them all tucked away for the night.

I was really excited about doing the bagels, because I have tried them several times at home and they always turn out flat and disappointing. Alas, these ended up over-rising, and even though we boiled and baked them in a wood-fired oven the next afternoon, they just didn’t quite work out. They were still quite tasty, though.

Saturday was pretty much a crazy whirlwind of baking. We got up, ate breakfast, and then immediately set to work. First up was white bread with cranberries and walnuts (although I opted for only walnuts in mine because I am not a fan of cranberries). We also made foccacia dough, which is an involved process involving a bazillion turns in an oil-filled container. In fact, most of the breads involved a whole lot of turning and resting, turning and resting, and the majority of them started out a much stickier, softer dough than I’m used to using. The lady who runs the place trained under German bakers, so it was definitely fun to learn some new techniques.

Here is where we also inadvertently got to do a thing we’d never done before. Friday night we’d been talking about how we do this weekend every year and mentioned some of the crazy stuff we’ve done, and somehow the possibility of taking rides in the bucket truck came up (there just so happened to be a bucket truck on the property because they were doing some work to one of the barns). I thought we were all just joking around, but Saturday morning, the handyman showed up and then before I knew it, we were all standing around outside, taking turns going up in the air in the bucket truck. I suspect the older gentleman who was also part of our class had never imagined that a 3-day course in baking would include a side trip up into the air in a bucket truck, but he jumped right in and had a blast.

After that was done, though, it was right back into the kitchen, mixing up even more dough for the next day, as well as for that night’s dinner. Perhaps the easiest of the yeast doughs we made the entire weekend was the one we used for the pizzas we made for dinner, shaping the dough and then rolling it out onto peels and sliding those into the wood burning brick oven she had on the back patio. Dinner was eaten outside, at a table set up in a gorgeous field, where we could see alpacas in the distance and enjoy the breeze.

Sunday was a rushed day. We tackled scones pretty much as soon as we got up. I’ve done scones before, and learned early on that the key to avoiding a tough, chewy scone is to work the butter in by hand, and then just barely mix in the rest of the ingredients. Her recipe was even lighter than the ones I’ve made – in part, I suspect, because of the inclusion of heavy cream. Everyone got to pick what type of scones they wanted to make, so there was quite an assortment of flavors to nibble for breakfast and the rest of the morning. Then we immediately tackled sweet breads, twisting dough that had been started the day before into complicated shapes filled with cinnamon sugar. And finally, we made beignets, starting with a sweet brioche dough and ending up with a maple and pecan glaze.

This is when it occurred, belatedly, to my older sister and I that we had no clue how we were going to get all this bread home with us (note to self – when attending a baking weekend, bring an extra suitcase next time). So they somehow scrounged up a huge box, and she and I fit every single bit of our baked goodies into it (there was a LOT), and then it was time to head back to the airport and catch a plane home.

I don’t know how long everything lasted at my sisters’ houses, but I stashed most of what I brought home in the freezer and then Richard and I worked our way through it for more than a week after. And also, the following weekend, using the recipe she’d given us, I finally managed to make perfect bagels. 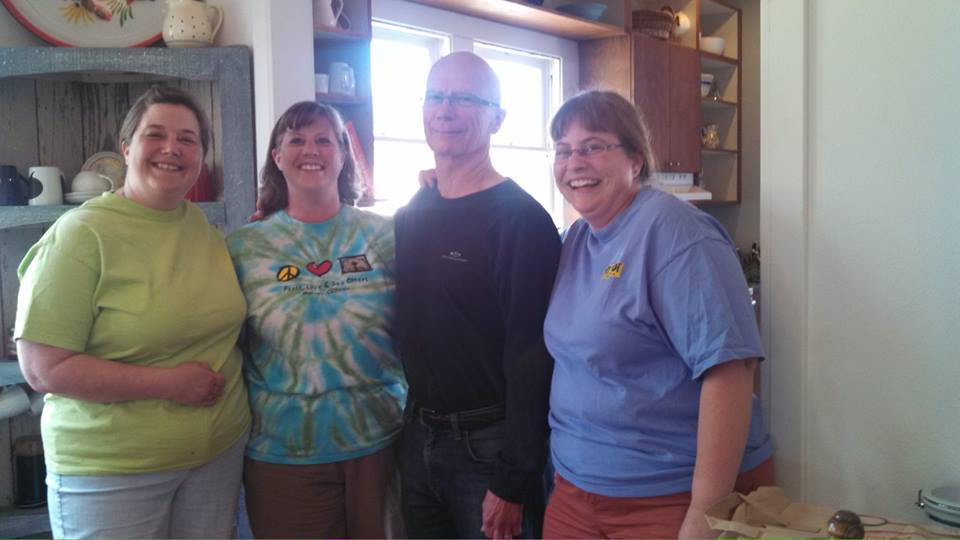 My sisters on the left, me on the right, and the poor guy who was in the class with us (I think he was a bit overwhelmed – my sisters and I tend to do a lot of being goofy when we’re off on our Sisters Weekends).