Richard has been part of a writers group for over ten years now, since long before we moved to Sacramento. Most of the people in the group have also been involved for just as long. I have gotten to know most of them over the years, through various gatherings hosted at our house, or due to the fact that a significant number of them also take part in Nanowrimo ever year.

One of the women who’s been in the group since the beginning is going to be moving soon, out of state, and it is likely that we won’t get much chance to see her again. So since tonight was a regularly scheduled writing group meeting anyway, the rest of them decided to do a little something to surprise her. And to go along with that, I decided to make a cake.

The little Meyer lemon tree in the backyard was extra prolific again, so I decided to make a lemon cake. It’s a pretty simple recipe, really – just a standard yellow cake (out of the Better Homes and Gardens cookbook), but with the addition of a few teaspoons of lemon zest added to the batter. You then frost it with a lemon butter cream, which is exactly the same as a regular butter cream, except that instead of adding milk, you add fresh squeezed lemon juice. It all adds up to a yummy cake with a very light tartness, and the addition of the lemon juice and zest to the frosting keeps it from being too overly sweet.

I am not a cake decorator by any stretch of the imagination, so I decided to do something a little bit fun with the cake (because seriously, any attempts from me to decorate a cake would look more like something that should be appearing on Cake Wrecks). So instead of trying to do anything fancy, I filled up a pastry bag with tinted frosting, and then I wrote “We’ll miss you” on the top of the cake. I put my name down in the lower right corner (cleverly shortening it so as to avoid having to somehow pipe out the entire thing legibly), and then I handed the pastry bag around to each person as they came in the door, and had everyone ‘sign’ the cake as well.

It turned out pretty awesome. Watching each person clutching the pastry bag and trying to pipe out their name was pretty hysterical for everyone involved (as an aside, it is harder to pipe your name in frosting when you are laughing than you might think), and at the end, well, maybe the cake still looked a bit like something that should appear on Cake Wrecks, but a cake for a writer, from a bunch of other writers, should have writing on it, and this one certainly did. And it definitely made her smile, and that’s all I was aiming for anyway. 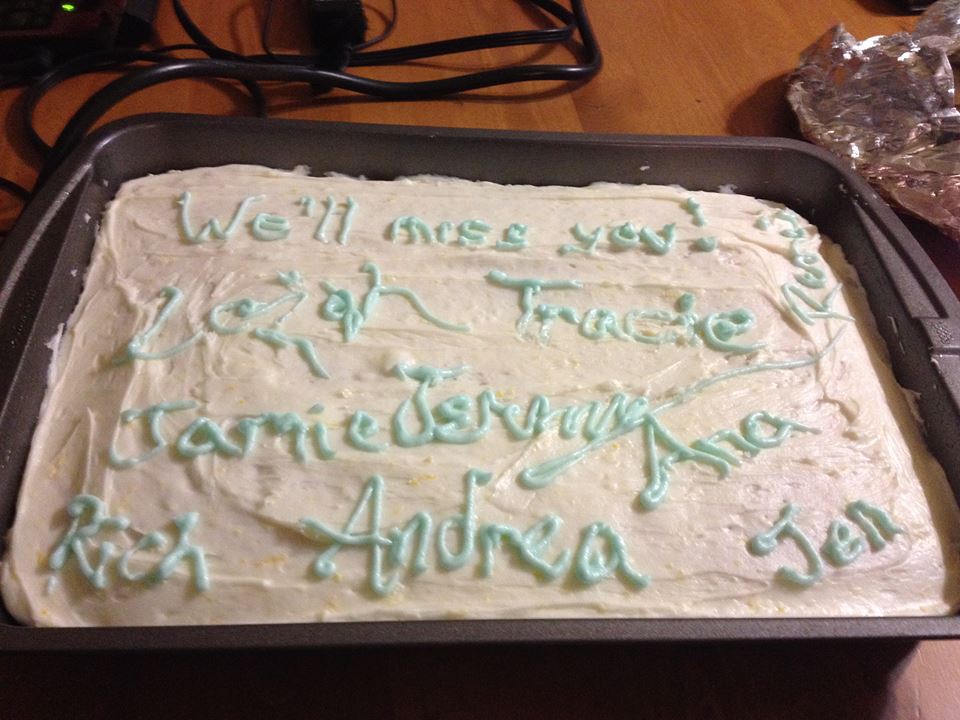