I got up early this morning, because there really is no way to ignore the incessant and pitiful whining of Azzie when he gets going (unless you are Richard who can sleep through all of it, grumble). Ah well. Early morning rising means a couple extra hours of knitting, and these days, that’s been pretty important.

Usually we do cinnamon rolls for breakfast on Christmas, but this year I wasn’t really feeling the yeast dough thing, so instead I made a variation of the this coffeecake, except instead of jam, I used a jar of my homemade lemon curd from the freezer, and we also left the nuts and cinnamon out of the crumble topping, since I was worried it might overpower the flavor of the lemon. The cake turned out quite delicious, so I’ll be doing that modification again in the future.

Richard and I exchanged our presents. Technically we only do stocking stuffers, except the things rarely fit in stockings anymore, and we also don’t bother wrapping because who has time for that, but shh, allow us to maintain our delusion.

Every year I get Richard a chocolate orange because he loves those things. I think the combination of orange and chocolate is foul and disgusting, but hey, different strokes for different folks, and this way he doesn’t have to share. Last year I actually made the chocolate orange (and poured it into a hollowed out orange rind), so this year I was all set to do the same, except that I happened to be on Think Geek and I found this ice mold, and possibly I was just looking for an excuse to buy it, so…uh…anyway, this year Richard got 3 chocolate orange Tardises and 3 chocolate orange Daleks. You will notice that there are only 2 Daleks in this picture. That is because Richard had happily bit the head off of one of them before I remembered I hadn’t yet taken a picture. They aren’t the prettiest of chocolates, but they are recognizable, and that’s really all I was hoping for. 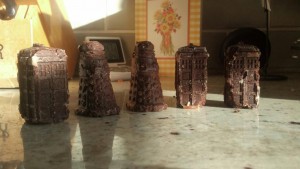 Every year Richard and I give each other something that is *supposedly* for the other person, but in reality is for the cats. This year my ‘cat’ present from Richard was this butterfly in a jar. It is battery operated, but the butterfly thingy inside flutters in a disturbingly realistic fashion, and once I turned it on and set it on the floor (because seriously, we live with highly caffeinated cats – there is no way a glass object meant for cats is going to be set ANYWHERE but on the floor) and Rupert, Ingrid, and Sherman were immediately fascinated with it. I am not entirely sure how it works (clearly it is MAGIC), but it doesn’t flutter all the time; just when you bump the jar. So all day we have been hearing the occasional random fluttering of the butterfly wings against the glass, indicating that yet another cat is watching it and trying to figure it out.

Meanwhile, Richard’s ‘cat’ present from me was this. 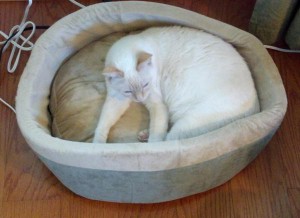 It is a heated pet bed, with a *very* soft and squishy cushion in the middle. Nutmeg climbed directly into it, like I expected she would (she is a really huge fan of warm things) and spent pretty much the entire day in it. Occasionally she would emerge, blinking sleepily, and some other cat would try it out (I caught Azzie curling up in it as we left the house for dinner, and Rupert was checking it out later in the evening when we came home), but Nutmeg has pretty much had sole custody of the thing since it was plugged in.

There were many awesome and silly presents. I think, however, that the one that made us both bust out laughing hysterically, is the one that we got from my younger sister.

Anyone who knows us knows that if you come to the house, that you will be greeted by a distracted ‘okay…hold on, all right, it’s safe, hurry in quick!’ sort of phrase. And any time people are over and ready to leave, the exiting is accompanied by a chorus of ‘where is Sherman? Who’s got the cat?’ Because Sherman, unlike every other cat in the house, is *still* convinced that outside is a Thing for Cats (well frankly, he is convinced that EVERYTHING is a Thing for Cats), while we, meanwhile, prefer him to stay inside where it is safe.

Plus our old doormat was starting to get a bit ratty and I was already pondering the fact that we really ought to get a new one. So when we opened this, well, it is perfect. Seriously perfect. And yes, it is now placed prominently on the front porch, where I am sure it will confuse a whole lot of people who have not yet met Sherman, and make everyone else who has already met Sherman laugh. 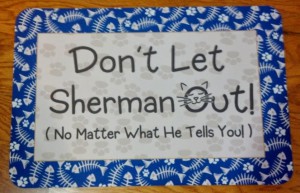 Anyway. It’s been a nice, quiet Christmas. We spent most of the day lounging around in our pajamas, nibbling homemade peanut brittle (courtesy of my younger sister) and coffee cake and cookies. I did a lot of knitting. We met some friends for sushi at our favorite sushi place and exchanged presents and talked and laughed and had a wonderful time. It has been a lovely day.

So I will leave you with this. After we opened all the presents this morning, we put down all the empty boxes and a bunch of packing paper and I dumped a small container of shredded paper in the middle of the whole thing. So the cats have been alternating between snoozing and tearing madly around making a giant mess all over the place. I know that eventually, this will be a pain in the neck to clean up and I am already finding bits of shredded paper in nearly every room in the house, but for a day or two, we can live with it. Because even cats deserve to have a happy Christmas too. 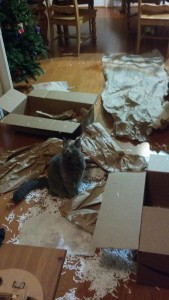