I is for Inevitable

She was doing more sneezing and she started pawing at her mouth, so it was obvious it was now noticeable to her, and she wasn’t as interested in food. Maybe we might have had another couple good days, or if not ‘good’, at least ‘decent’, but it would have only been for us, not for her.

Last night Richard gave her as much cream cheese as she demanded, as a last treat. Then we put her into the carrier and took her to the emergency vet. The doctor who administered the final shot was the one who saw her when all this first came up. In a way, that was a bit of a comfort because it was clear to all of us that there wasn’t really any other option.

Rosie purred the whole time, and rubbed her head on my hand, demanding attention, until she fell asleep one final time. 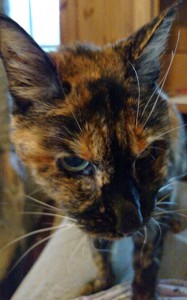 The letter I is brought to you by the Blogging from A to Z challenge.