So part of the fun of being in a musical group is that sometimes the group is asked to perform for other organizations’ events. This month, we’ve got two of those – both of which will be taking place tomorrow.

One of the performances we’ll be doing is indoors, so it’ll be our usual attire. The other, however, starts with us singing for an hour or two outside, which means, considering it’s been rather chilly out lately, that we’ll all be bundled up in heavy jackets and gloves and scarves and hats.

I have a heavy jacket. I have shawls and scarves galore. I also happen to have a pair of fingerless gloves that I made years ago, and which live in my purse for the days when the office temperature is set to icebox. What I did not have, at least prior to today, however, is a hat.

Let’s just say there’s a reason I do not make myself hats. Some people look good in hats. I am not one of them. Not remotely at all. But it’s going to be cold, so vanity has been displaced by practicality. Thus, yesterday I went browsing through Ravelry and found a nice pattern, and then I rummaged through my stash and found a skein of yarn in a nice rich red, and then I whipped up this little number. 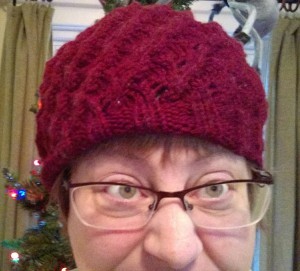 Today’s fun thing is this Advent Calendar by Compound Interest. If you are not already following them on Facebook, you really should. They post all kinds of interesting information breaking down the chemical components of ordinary things (pro tip, *everything* is made up of chemicals, no matter how ‘natural’ it is, because SCIENCE!).

« More than the days of the year
Back to back »

« More than the days of the year
Back to back »