Two for the price of one

Yesterday morning started far too early, what with getting up to meet my coworker in the hotel lobby so that we could go for a walk and try to churn through a couple thousand steps as a way to kick off the day. As predicted, the amount of coffee then required to make it through the day was very, very high. At the airport last night I got in another couple thousand steps, due to the fact that, having lots of time to spare, I decided to walk the very long hall between terminals instead of taking the shuttle, and also due to the insanity that was the security line. That’s an hour and a half I won’t ever get back. But hey, kudos to whoever coordinates the security checkpoint lines at the Atlanta airport – it had the feel of a Disney ride. You weave around for a bit and then you turn a corner and just when you think you might finally be getting close to the end, nope, there’s another forty five minutes of slowly zigzagging along.

And then I didn’t get home until around 11pm, by which point I was in no mental state to try to muddle through crochet directions, which is why there was no entry from yesterday, nor was there a snowflake. As penance, I ended up doing what would have been yesterday’s snowflake twice. The first time the center ring was much too loose, resulting in a sad, pathetic thing that did not look remotely snowflake-like. Technically I suppose I could have just passed it off anyway, (because if snowflake #2 is any indication, clearly my standards for these things are extremely low). Luckily the second time worked out much better. 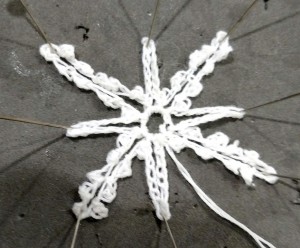 I suppose I ought to note that I am actually doing the snowflakes in the order in which they appear in the book. So when I say this is snowflake #4, it actually was made using the pattern for snowflake #4. You know, in case anyone is reading this and is so inspired by my wobbly little sad excuses for snowflakes that they decide to rush right out and buy the book and play along.

As for snowflake #5, once I did #4 the second time, #5 was a piece of cake. It might not be obvious at first glance, but there are only a few very minor differences in the pattern between these two. 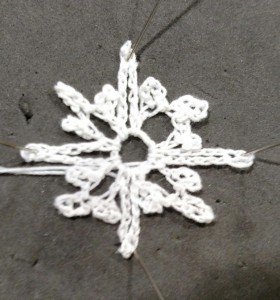 I rather like these two. Or at least, I like the fact that all the directions made sense and more importantly, they both turned out closer to what is pictured in the book than any of the previous ones have so far.