I finally sat down and did the taxes today, and it was…shockingly painless. I think this is the first year I can actually say that. Oh don’t get me wrong, we owe a sizable amount, same as we do every year, because we are DINKs (dual income, no kids), and alas, the IRS won’t let us claim the cats as dependents. But the actual act of doing them was much better than it’s ever been. Hooray for Turbo Tax, which now is able to import all the documents that have caused me so very much difficulty and swearing in the past. Perhaps next year I won’t put it off so long.

Ha. Yeah, right. I say that every year. But then, when one knows one is going to owe, why bother doing it early anyway.

Tonight was the final concert of the Hildegard project, and it went really well. Our normal venue doesn’t have quite the same acoustics as the cathedral in which we performed last night, but on the flip side, the layout of the cathedral doesn’t give us flexibility to let us do this. 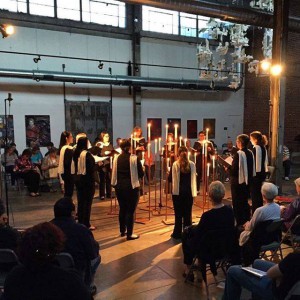 Blogging from A to Z in my own special way.