Yesterday morning we were heading out of town and as we drove down I-5 through downtown, we saw flashing emergency lights on the other side of the freeway and then, bizarrely, a small white box truck perched precariously over the railing. This is on a section that’s up high, so if that truck had gone completely over, the occupants would have ended up in a world of hurt.

It wasn’t until today that we found out what had happened. Some idiot was running from the police, and got onto the freeway going the wrong direction. The box truck just had the misfortune to be in their way. And I was right. The occupants of the car didn’t survive. The driver of the truck did, but is facing a long and difficult recovery.

That was a rather sobering reminder that no matter how careful a driver *you* might be, all it takes is one idiot doing something stupid, and you might be the one who ends up paying for it.

And on *that* cheerful note, how about another snowflake? I know this won’t mean much to anyone else but me, likely, but this snowflake has 6 rows of directions (the most in the book so far). 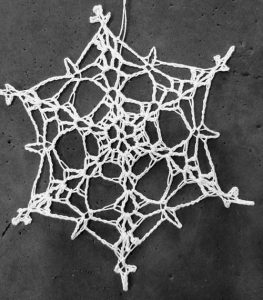