The only thing not fun was the weaving in of ends

Unlike the first pattern for Tour de Sock, I loved every single thing about the second one – Kanteletar. Colorwork! A new-to-me heel idea that takes the whole ‘your ankle is bigger than you think’ concept into account! Latvian braids! 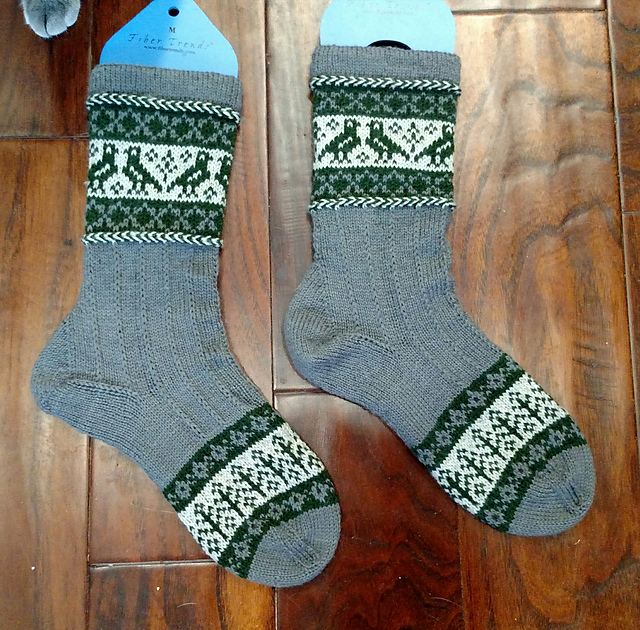 (Please note bonus Rupert paw in top left of picture. After all, I couldn’t possibly ever manage to get anything photographed in this house without at least *one* cat involved.)

These were an absolute delight to knit. Turned cuffs and Latvian braids are annoyingly time-consuming (which I’m sure was part of the reason why they were included in this pattern, since this *is* supposed to be a race, after all), but they do look lovely when done right, so I don’t mind slogging through them because I know the results will be worth it. And doing the stranded colorwork on these reminded me that I have been wanting to do more stranded colorwork in general, and socks are the perfect vehicle for this (small, portable, naturally done in the round so you don’t have to worry about steeking or any other annoyances, and far less overall commitment than an entire sweater, so if you give up and chuck them in the time-out bin, it’s not a huge loss).

The heel on these is done as sort of a little cup, with increases that flare out at the back of the sock, and then the turning happens at the base, with some short rows as well as decreases. At first I thought maybe this heel wasn’t so effective – when I tried on the first sock, it felt very baggy. But when a friend with larger feet than mine tried it on, she loved it and said it was really comfortable…which thus led me to the conclusion that maybe it just felt baggy on me because I accidentally knit the feet too long, so wasn’t able to accurately judge how they fit.

So since this *is* the Summer of Socks, and there is still plenty of time before pattern #3 is releases, I decided to do up another pair, using that new-to-me heel. I also used the slip-stitch motif from Kanteletar because 1) I really like how the heel centers around it, 2) sometimes you want something slightly less boring than just plain stockinette, and also 3) it makes it a lot easier to get two socks to be identical in length when you can count pattern repeats and not just hold them up side by side and take some wild guesses. 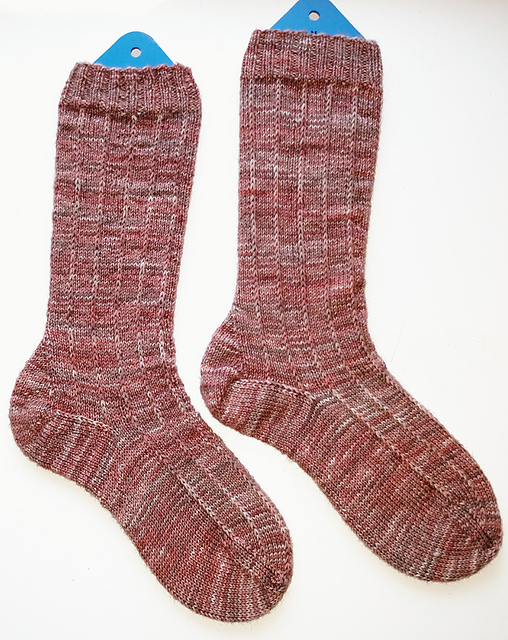 Verdict: I was right – the cup heel was only baggy before because the foot was too big. I’m quite pleased with how these turned out, so much so that I might even be tempted to use this heel again.

As for the too-big pair of socks I completed for the challenge, well, no worries there – I’m in no danger of running out of socks (I’ve made dozens and dozens over the years – my sock drawer is overloaded) so those have been sent off to someone else who will hopefully love them as much as I do.

« Should have done these during Shark Week
Two little wins »

« Should have done these during Shark Week
Two little wins »