Continuing the ‘Tour de Sock’ catch-up, fresh from the ‘joy’ (HA HA HA) of beaded socks, my team all eagerly awaited the final pattern. I was excited because it was to drop the weekend of Labor Day, which means I’d have three whole days to work on just these socks, and surely that would be plenty of time.

And then the pattern dropped and….wow. Um. yeah.

So I’m normally a fan of colorwork – I can do it pretty quickly and it can turn out some really lovely things. But this one…this one had places where you were to carry 3 strands, and sometimes even 4, at a time. This was going to be one really, really dense sock.

I started working on this, my enthusiasm significantly dampened, but still determined to make it work. Three hours later, the time it usually would have taken me to whip up half a plain vanilla sock, I had barely made it past the cuff. I checked in with the rest of my team, and one by one, they were all chiming in. Nope. Not happening. They tried it, they hated it, they were done.

And I looked at that stupid cuff and pondered spending the next several days swearing at a stupid pair of socks that I was never, ever going to wear anyway because of the thickness, and I remembered that I signed up for Tour de Sock because it was going to be fun and (yes, even with the stupid beads) so far it had been, but not if I kept going. There was no penalty for just saying enough is enough. I’d already knit five pairs of socks, and taken ninth place for two of them, which is really great (sleep is for the weak!), and nothing would happen if I just said ‘screw it’ and made something else instead.

So I did. I joined the rest of my team in declining to take part in the triple- and quadruple-stranded insanity (and considering that by the time the deadline had hit, only 36 people had finished, out of nearly a thousand participants who’d originally signed up, we clearly weren’t the only ones who took a look at that pattern and said ‘oh hell no’). And then I cast on for a completely different pair of socks by plucking a mosaic pattern out of one of my stitch books, and I made these socks for Richard. And thus the Summer of Socks was concluded for the year. Huzzah. 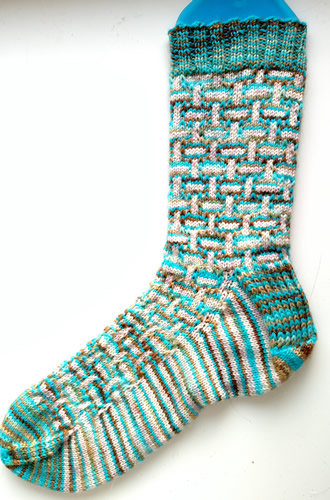 (I haven’t a clue what the yarn was that I used because *someone* whose name either rhymes with Herman or Schubert knocked the balls out of the bag where they were carefully placed to be safe from cats, and the balls fell on Nutmeg’s head, startling her so that she then proceeded to pee on them before skittering off, and I just gave up and threw the leftovers away, and also I’m too lazy to go try to figure out where I found the stitch pattern in the first place, but people, there’s a bazillion patterns on Ravelry so just go there and don’t ask me questions, okay?)