Today was cold outside, and I had originally planned to be driving kittens places, except that that changed so instead I stayed home and did laundry and pet kittens and knit, and also I baked, because hello, have you met me.

I made another batch of the Alfajores because I’m apparently not rolling out my dough thin enough or else the number the recipe claims is a giant lie (there is no way it makes 42 filled cookies (two cookies per sandwich) – that would be 84 cookies from one batch and I definitely did *not* get that many cookies!). I’m not going to bore you with pictures of that though, because they’re not very exciting to look at yet – just pale brown discs that are now resting in the freezer until it’s time to assemble.

However, I also made panettone, because my sister and I decided to extend our little Great British Baking Show bake-along to include the two holiday episodes they released to Netflix (which technically were from 2020, but eh, who cares, it’s more baking!).

I’ve never been a huge fan of panettone because 1) it tends to be kind of dry, and 2) it usually includes a lot of dried fruit, which I don’t like (raisins and all their wrinkly little counterparts are Not Food). But it looked intriguing, and when compared to the other two possibilities (a mincemeat pudding – which is chock *full* of the Not Food things) or an illusion cake (neither of us was in the mood to deal with an entire full-sized cake), panettone was the natural choice. Plus, by making it myself I could replace the fruit with something far more tasty, like, say, chocolate.

Technically we were supposed to make 12 individual panettone, but I pondered trying to turn a muffin tin into a set of panettone molds, and gave up and made one big one instead.

Panettone is basically just an enriched bread dough, but you mix stuff in (dried fruit or nuts or chocolate) after the first rise. Otherwise it’s really not that much different than any other bread dough out there.

I used a large metal bowl because I wasn’t entirely sure what else would work, and it was clearly too big, so when it was finished baking, it….does not look like a panettone. 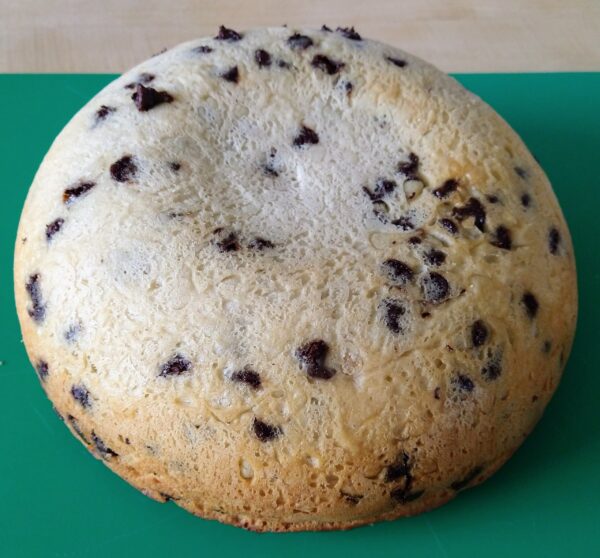 But it tastes fine. I might have added a little more chocolate than it called for because I wanted to use up the remains of the bag of semisweet chips in the cupboard, so you definitely get chocolate in every bite, which helps because oh hey, what do you know, apparently a main characteristic of panettone, even if you bake it yourself, is that it is dry. 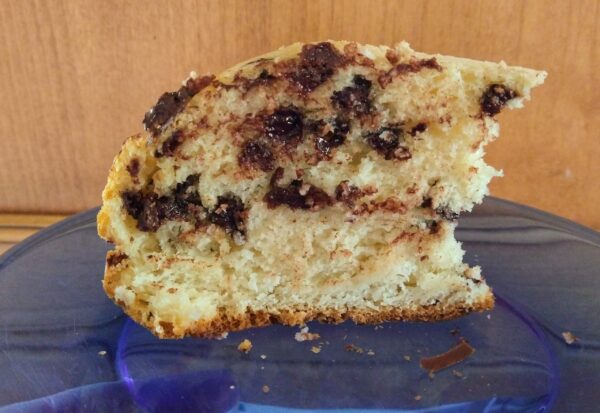 But now I have made panettone (and will be gifting large chunks of it to other people) so I can check that one off the list and never bother again.

« All is calm
Life with cats »

« All is calm
Life with cats »