The best gift I’ve ever given

In 2011, somewhere around November, I had this really fun idea. Richard is a writer, and he has a whole lot of friends who are also extremely talented writers. So I sent out an email to a bunch of his friends, just to see if anyone else might be interested in playing along. I wasn’t sure, at first – it was kind of a big commitment I was asking everyone to do, but the responses came back fast and furious. Yes, yes, oh please yes! Every single person I contacted was all in.

So during the month of December, 2011, we hashed out a schedule, and worked out all the details. And then January 1st, the first person got started, and when she was done, four weeks later, the first chapter of the collaborative book for Richard was complete. Over the course of the year, the book continued to take shape. Twelve amazing writers wrote chapters, in succession, each one picking up where the other left off.  A thirteenth wrote a wonderful forward. And another talented friend did the cover art. By November, the writing was done – a complete book by a whole group of his friends, written using the style and themes that Richard uses in his own work.

I am so incredibly grateful to all of the awesome people who agreed to do this. Every single one blew me away with what they did with the characters, the story, the whole thing, and I looked forward to every single chapter as it came in, eager to find out what had happened next. Truthfully, I had the easiest job in all of it, I know. All I had to do was maintain the schedule in Google docs, and send out halfway reminders during each person’s time period, and do some cursory editing as it was sent along. At the end, I (and one of the other writers involved) did a final round of editing and then I got it all uploaded and formatted for print via Lulu.com. And then I ordered fifteen copies – one for Richard, and one for every other person who was involved – and sat back and impatiently waited. I have never been so excited to see a box show up on our doorstep as I was when they arrived. 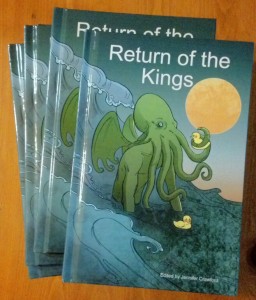 Back in November (of this year) I broached the idea of having a combination New Year’s Eve / birthday party. And as he sent out invitations, I was quietly making sure in the background that as many of those involved in the project (who lived locally) could be there, and working out a time at which we knew everyone would have arrived.  In the morning, I told Richard one of his presents wasn’t going to be coming until that night. And then an hour or two into the party, we gathered everyone together into one room and presented the gift.

Richard is lucky to have so many extremely talented friends. If we’d started even earlier, I suspect I could have had nearly twice as many chapters as we did (because there are so many other seriously talented people who I know would have been just as excited to be involved), but four weeks per person was pushing it as it was, considering they had to work this around jobs and family and other writing projects, and all the rest of the obstacles life puts in the way. I cannot begin to thank all of them enough for jumping in, head first, with such enthusiasm, over a year ago, and being willing to see this through.