As I was rummaging through the yarn stash this afternoon, I stumbled across a half skein of yarn. I have no idea how I got it, but the fact that it’s only half a skein suggests I’ve already made at least one dishcloth out of it, and the lack of any similarly colored dishcloths in the house further suggests it was likely the result of a swap – probably Dishrag Tag. I pulled it out, pondered it, and then promptly dragged out the kitchen scale to see if it might be enough. Exactly 30 grams of yarn, and one of the dishcloths from earlier in the week was 32 – which means it would be fine.

Even so, I decided I didn’t want to have to rip anything back. So I cast on for the classic diagonal garter stitch cloth with the eyelet edging.

There are a bazillion names for this pattern, but I think my favorite is the Idiot’s Dishcloth. It requires virtually no thought whatsoever to knit, and (except for the first and last rows) consists of a single row. The beauty of a diagonally knit cloth is that I could occasionally weigh the remainder and thus knew exactly when to start the decreases. You can see in the picture just how much yarn was actually left after I bound off. 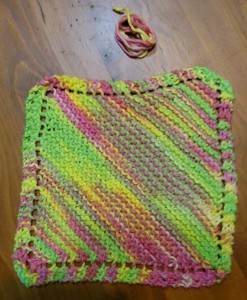