I cannot recall exactly what year it was that I first read a Harry Potter book. I do recall, however, that it was while I was spending the night at a friend’s house, and that I stayed up for hours binge-reading the first two books in quick succession. Later, I joined the hordes eagerly awaiting each book release, and we even went so far as to pick up our copies of the last few books at the midnight releases. Every single time we got a new one in the series I would sit down in the day or two beforehand and read every previous one all over again. I loved those books. Heck, I still do. They are not high art, to be sure, but they are incredibly fun to read, and I especially love how many kids finally found a love of reading through the gateway drug of the little boy who lived in a closet under the stairs on Privet Lane.

Recently it occurred to me that while I’ve read all the books numerous times, I’ve not actually seen all the movies. I checked Netflix, but they didn’t have any of them, and we’ve been pondering various options for tracking them down, and then someone suggested we check the library.

Here is where I guiltily admit that while I regularly avail myself of the vast network of books I can get from the library, never does it occur to me to check out *other* things. But sure enough, they’ve got every single one of them in stock, so over the past week or so they’ve all been trickling in. And tonight we sat down to watch the first one.

Emma Watson is, hands down, my favorite thing in this movie. She is cuter than words, and has the most adorable glare, and oh, I just want to pick up tiny little Hermione and keep her in my pocket to pull out when other people are being clueless idiots. As for the rest of the movie – eh. I recall being a bit disappointed by what they left out from the books, and the second time around I didn’t feel much differently. But if we’re going to do the whole series, we’ve got to take the bad with the good, and at least now it’s done with. And at least there was Emma Watson to keep it from being as awful as it otherwise would have been.

Today’s dishcloth is a fairly simple basketweave pattern because I needed something that didn’t require much thought while my attention was otherwise distracted by Emma Watson, and Alan Rickman being deliciously cold, and Maggie Smith being EXACTLY how I always pictured McGonagall every time I read the books, and oh, also some kid who lived under the stairs. 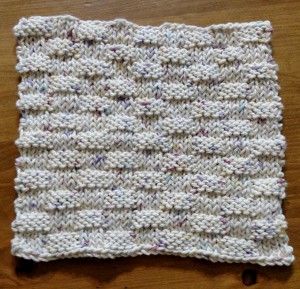