I’d been hearing low rumbles for half an hour or so, but I didn’t pay them much mind. They could just have easily been one of the neighbors moving their garbage cans back into their yard, or dragging something around. But then a flash of lightning caught my eye through the window, and a few seconds later, the loud BANG of thunder, followed shortly thereafter by the frantic skittering of all the cats in the house as they reacted to the noise. And I looked through the window and thought, ah, *there’s* the storm they’ve been saying we’re going to have.

For those of you who might not be aware, California is in the middle of a serious drought (of the ‘once-in-500 years’ level of severity). We got a lot of rain in December, but it was only a drop in the bucket when compared to what we need to end this thing, and January was the driest month in recorded history (going back to the 1800s). So any mention of possible precipitation gets everyone around here anxious and hopeful and crossing all their fingers and toes.

It dribbled on and off for most of the day. But by the time I had to leave the house this evening, it was pretty steady.

The group in which I sing recently found ourselves a new home for both practice and performances – at Beatnik Studios in downtown Sacramento. It’s a wonderful space -the acoustics are terrific, and since there’s no fixed seating, we’ve got a lot of flexibility in how we perform to make the most of it. It also means we occasionally get to collaborate with other artists.

The reason I headed out into the rain tonight was to take part in this, which blended music, blessings from a Shaman, and so on, into a really amazing experience. I was one of the singers in the quartet so we were downstairs, letting our sound come up from below. Plus we found a huge piece of plastic so two of us (amusingly, the two shortest in the group) turned it into a thundersheet during the latter part of the ceremony.

Driving back home after the event, I noticed that some of the roads and off ramps are starting to flood. I am torn between being thrilled that enough rain has fallen that this is a problem, to being concerned that someone is going to get hurt when they hit one of those huge puddles. But at least it is raining. Finally. And hopefully there will be a lot more where it came from.

I started this dishcloth with a different yarn, but about 3 or 4 pattern repeats in, I ripped that out and started over with the solid green (and yes, it’s really green, although the color didn’t come out so well in the picture below). Variegated yarns always look so pretty in the skein, but they are *such* a pain to work with later on. Pattern is Diagonal Check. 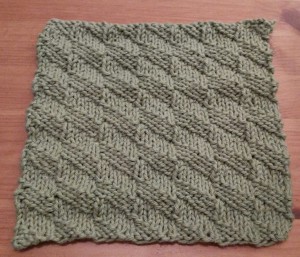