We watched the 2nd Harry Potter movie yesterday. Alas, not even the adorableness of Emma Watson could save that one. Such a relief to know they got a new director for all the remaining ones, or this franchise might have been doomed to fade slowly away. I spent the majority of Chamber of Secrets sitting on the couch cringing and reminding myself that I just had to grimly get through it in order to move on to the next one. I think the problem is that the first two movies feel as if someone decided they were actually making an action movie, but with magic (!!). And that isn’t what Harry Potter really is.

Thankfully today’s Harry Potter movies were significantly better. I know I saw Prisoner of Azkaban before, when it first came out (ten years ago), because I remember how much I loved David Thewlis as Professor Lupin (surely I am not the only one who thinks it might be kind of fun to have a boggart in the closet, right?). However, I’m pretty sure I never managed to go and see Goblet of Fire (although interestingly, Richard *did* see it, so maybe I was out of town or something – who knows), because I am sure I would have remembered the great relief I felt upon discovering that at least in the movie, the script writer had the desperately needed foresight to hack out all extraneous fluff about the Quidditch tournament and get right to the actual plot.

Today’s dishcloth doesn’t have an official pattern. It was inspired primarily by a test knit I’m currently working on (because yes, I am knitting other things beside dishcloths this month; it’s just that the dishcloths are the only things for which I can show you pictures), which includes swaths of double seed stitch. Considering yesterday’s issue with the variagated yarn, I decided to give something a try, and I’m pretty happy with how it turned out. There’s pooling, of course, since that’s the curse of the variagated yarn after all, but the texture of the pattern makes up for it. 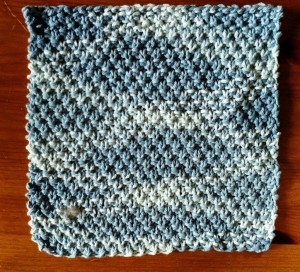 Because I know someone’s going to ask, here’s what I did. I cast on 36 stitches, and then I did 2 rows of k1, p1, followed by 2 rows of p1, k1, and just repeated that until it was roughly square in shape.