The Harry Potter movie saga is now done, and overall, I’m mostly happy. Of the remaining four, I think I’d only seen the first Deathly Hallows before, so the others were brand new for me.

I know that when they turn a book into a movie, that things have to be cut out, and in some cases I am fine with it (see yesterday’s comment regarding the hacking out of most of the Quidditch Tournament). But there were a lot of things that popped up in the movies that were never actually *explained*, like the fact that Harry keeps peering into a piece of glass. In the movie, no one ever explains why he has it, or what it is, or how it works – it’s just some random bit of glass he pulls out from time to time. Considering that it’s fairly central to the plot, that was a big disappointment. Oh and let us not forget that all along Harry’s been convinced Snape is evil, yet when he’s lying there dying, Harry is right there to take his memories and do exactly what Snape says.

And some things that were left out entirely. Removing the entire subplot with the house elves? Okay, that’s fine – it didn’t detract from the story. Ignoring the fact that Neville Longbottom was *also* part of the original prophecy – that I’m not okay with. By the end of the last movie I’d all but convinced myself that they were going to change things and Neville wouldn’t be the one to kill the snake, so when it finally happened I cheered. Neville, of all of them, deserved that glory.

I do feel as if the second half of Deathly Hallows addressed that whole tangle with the elder wand more successfully than the book, so at least there is that. And like I said, overall I’m pretty happy. And anyway, it doesn’t matter because now I have finally seen them all and that was the whole point of this exercise in the first place.

I freely admit today’s dishcloth is totally phoning it in. Cast on 36 stitches, knit until done. Voila. Boring garter stitch dishcloth. Let’s just say that I’ve got a lot of variegated yarn in the stash and I didn’t feel like trying to find another pattern to deal with it. 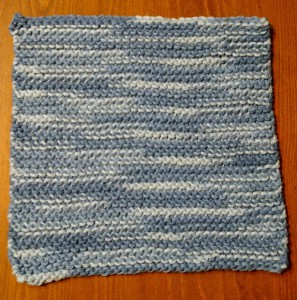