Today’s pattern is a variation on the Two Color Ladder Stitch, primarily because the first time I tried it, I wasn’t reading the pattern correctly in the first place and did the entire thing in stockinette and oh, the curling. Shudder. So I ripped it out and did the entire thing in garter stitch, which looks fine, but hey, upon rereading the pattern, turns out I should have been doing that half the time anyway and that probably would have fixed the curling issue entirely. Ah well. 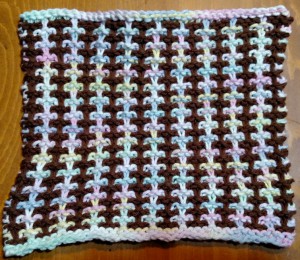 The color combination sort of remind me of ice cream. I’m not entirely sure why – maybe it’s the brown (chocolate) against the pastels (neapolitan, perhaps?). But since I’ve still got a bunch of both of these colors left in the cotton stash, expect to see it popping up again at at least once during the remainder of the month.