So it’s been all kinds of exciting (and by ‘exciting’ I mean the type of excitement that makes me want to smash things) around here the last few days. Yesterday I was dealing with some comments on the most recent entry and discovered that my site wasn’t working – a 500 error was all that would pop up. Gah. I couldn’t figure out what might have happened – the only thing I ever do on it these days is post entries here, so it’s not as if I’m mucking around in the backend files or the underlying database. Bizarrely, the WordPress admin side was working, sort of, but the main blog site – kaput. Nothing.

Throughout the day I checked in with Richard to see if he’d had any luck getting any feedback from the support ticket he submitted for me (it being hard for me to deal with that while in a meeting). Finally, last night, my site was back up again, with the rather cryptic explanation that somehow a specific file had been edited, but they’d fixed it, and oh by the way they also checked all our other sites and they were all fine. Hmm.

Fast forward to this morning when I decided I was going to see if they really *did* check all our sites, and hey, what do you know, more 500 errors! This time the site impacted didn’t have a WordPress install (at least not as the main page) so it made me feel a bit better about maybe it being something I’d done inadvertently, but again, it took them most of the day to get it fixed. I also went in and checked every single subdomain I could think to check – found a couple more that clearly hadn’t been fixed like the support ticket claimed, and then we sat back and waited. Impatiently. And also very annoyed.

Things seem to be working fine now, and curiously, another issue that’d been vexing Richard on another of our sites has also been mysteriously fixed. Oh, and it turns out that there were some updates to the back end server (by our hosting company). I am SURE that had nothing whatsoever to do with why everything suddenly broke at exactly the same time. Ahem.

Yes, I know, #FirstWorldNerdProblems. Doesn’t make it any less frustrating.

Today’s dishcloth is another one with no linked pattern (yet) due to me making it up off the top of my head. I’ve charted it up though, so at some point I’ll publish it on Ravelry or something. Maybe. Some day. Don’t rush me! 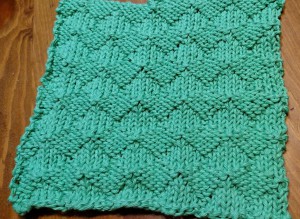 « Dishcloth-a-Day: Day Twelve
The shades of grey you were really looking for »

« Dishcloth-a-Day: Day Twelve
The shades of grey you were really looking for »