On the way to work this morning I passed a woman riding her bike, and it was very hard, as we both pulled up to the same stoplight, for me to not roll down my window and ask her if she was just an idiot, or if she had a death wish. She had a helmet. Of course, it was dangling from her handlebars and not actually on her head. To add to the fun, she had earbuds on and was not paying much attention to the cars passing her by, or anything else for that matter.

I suppose I have to give her credit for at least *stopping* at the red light – I’ve seen far too many cyclists go zooming right through (apparently unaware of the basic law of physics that says when a large, heavy metal object collides with a smaller, organic object, the larger heavy object is going to win EVERY SINGLE TIME). But still. Why even bother with a helmet if you’re not even going to wear it?

Damn kids, get off my lawn. Or something.

Today’s dishcloth was made using the Diagonal Scallop stitch. Sorry, it’s teal again, because this is the color that will not die. 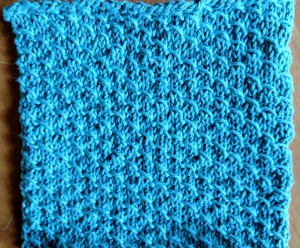 « Dishcloth-A-Day: Day Twenty-four
Dishcloth-a-oh let’s face it, we’re all about the Llama Drama »

« Dishcloth-A-Day: Day Twenty-four
Dishcloth-a-oh let’s face it, we’re all about the Llama Drama »