Dishcloth-a-oh let’s face it, we’re all about the Llama Drama

So in case you were not aware, there was a Very Exciting Event that happened today that lit up the internet. No, I’m not talking about the fact that the FCC approved Net Neutrality (hooray for the FCC!). I am, of COURSE, talking about the two llamas that escaped in Arizona, and then led a whole lot of people on a wild chase reminiscent of the Keystone Cops. The Twitterverse was glued to its monitors as all of this played out in live, streaming video. I am not sure which was more fun, watching the llamas loping through the streets, or reading the tweets. This was one of my particular favorites (because okay, yes today was *also* all about the FCC’s ruling, llamas not withstanding).:

MERE SECONDS AFTER #OBAMANET RULING, LLAMAS ARE RAMPAGING THROUGH THE STREETS. IF ONLY THE ISPs HAD RESTRICTED WINAMP

Really, this is what the internet was MADE for. Damn, but I do love living in the future.

Today’s dishcloth was made using a stitch pattern from a recent test knit I did. I adore this stitch pattern – it’s easy to do and requires minimal thought (well, okay, remembering to knit the interior color on the back row instead of purl it might require a *tiny* bit of extra thought), and it creates a really neat looking fabric. 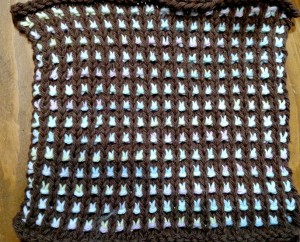 I did mention how much I loved this color combination before, right? I loved it so much I then decided to whip up a second dishcloth, using the same two colors and exactly the same pattern, except….the colors are reversed. 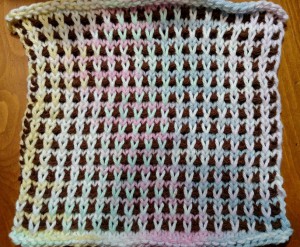 Think I prefer it with the darker color as the border, but either way, I love it.