I did not grow up watching Star Trek. In fact, my first exposure (beyond seeing The Wrath of Khan in the movie theater, with which I was extremely unimpressed as a teenage girl) was The Next Generation. So unlike the classic Trekkie, I prefer Picard over Kirk. And watching the original series as an adult, I admit I did more than a fair bit of cringing at the camp, and at Shatner’s acting.

So I do not have the same connection with Spock that a lot of nerds in my generation do. I came to him as an adult, and not as a quiet, bookish, awkward kid. But that does not mean I loved him any less. He showed up from time to time in TNG and it didn’t matter that I didn’t always have the classic Trek backstory to draw from; his character appealed to me just the same.

I know that people get older and eventually they die, but for some reason, Leonard Nimoy was one of those people who just seemed like he would maybe stick around forever. The New York Times has a wonderful obituary; an overview of an amazing man. He will be greatly missed.

It seems a bit awkward to follow that up with a dishcloth, but, well, the month isn’t over yet. Also it’s teal AGAIN, so you get double apologies. 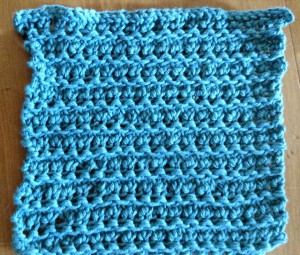 Yes, I know this looks suspiciously like crochet, but it is actually knit. This was made using the granite stitch. I have no idea why it’s called that – maybe because it’s got ridges, like a mountain? Or something? Eh, who cares.

(Possibly I might be a little done with dishcloths. And teal.)

« Dishcloth-a-oh let’s face it, we’re all about the Llama Drama
Black hole »

« Dishcloth-a-oh let’s face it, we’re all about the Llama Drama
Black hole »