Sitting here at my computer, I heard a thump (the telltale sound that some cat (my first guess is the culprit was Sherman, because it usually is) was on the kitchen counter where he knows he isn’t supposed to be), followed shortly thereafter by a strange swishing sound. I sat here for a moment, trying to figure out exactly what he’d managed to get hold of this time, and then a small procession of cats charged through the office at top speed, led by Sherman, who had my measuring tape in his mouth, the entire 4 feet of tape trailing along behind him.

I will go rescue it in a few minutes. After I finish writing this up. And also after I stop laughing.

Today’s dishcloth was made using the rank and file stitch. No clue why it’s named that. I really had fun with this one. It’s not too horribly fiddly, and it’s easy to memorize, and the cloth it produces is extremely thick and squishy; so much so that I could see this thing easily doubling as a hot pad or potholder. 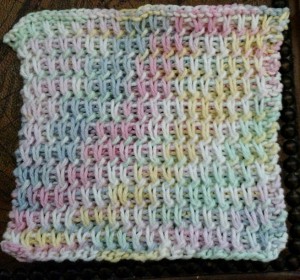