Last night, as we were working our way through the massive list of Stuff That Has To Be Done, I pulled out a new toy for the cats (well, by ‘new’ I mean I picked it up for half off last year during the after-Christmas sales and only yesterday remembered I had it).

This toy required some minor assembly. I especially love the back of the box, which includes this reminder. 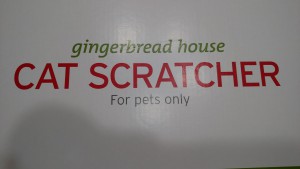 I really want to know what happened that led the marketing department to insist that *that* be included on the outer packaging.

Next I had to assemble the box. It has a scratching pad for the base. You will notice Sherman is testing it out for me. 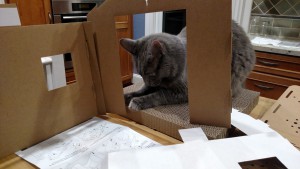 All assembled – a rare, cat-free shot. I especially like the little chimney at the top, which is large enough to reach a hand down inside to tickle an unsuspecting cat. Not that anyone in this house would do that (whistles innocently, looks around shiftily). 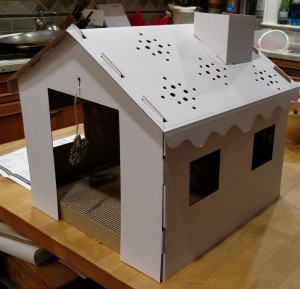 At this point I put it on the floor in the dining room. Two nanoseconds later, Sherman charged into the room and DOVE inside. The little toy that dangles from the front (although shortly before this it got smacked hard enough to flip up to the top) did garner some interest at first, but it’s attached rather loosely so I am figuring that is going to disappear pretty quickly. Mainly, though, Sherman just seemed to like curling up inside and hanging out. 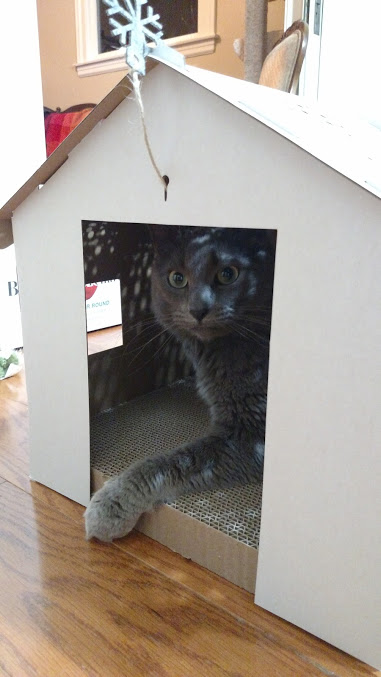 That picture was taken shortly after I put it down on the floor. I figured, okay, he’d play and then the other cats would get a chance to check it out, and eventually, like with every other cardboard thing we give them, we’ll be picking bits of cardboard up off the floor. However, Sherman apparently fell head over heels in love with it, to the point where he actually stayed in there for *hours*. He only left the little house when I headed downstairs to go to bed (he and Ingrid are my constant under-cover bed buddies every night). And this morning, after all the cats followed me back up the stairs once I got up, he went right back into it, and has been camped out in there for the past hour. Clearly this was $5 well spent.

Here. I give you a teeny tiny video of Sherman playing in the box, shortly before he decided to just curl up and fall asleep in there. Please note presence of Nutmeg in her squishy heated bed, pointedly ignoring the entire thing.