Today was originally going to be busy: the usual Farmers Market trip in the morning, followed by catching up on chores and then wiling away the afternoon and evening in a gaming session with friends. The gaming session fell through – this time of year people are getting sick, or overbooked – so then we thought, oh boy, an entirely free weekend day (a rarity for me in December), so we talked about maybe just spending the day doing a bunch of cooking to restock the freezer, and actually dragging the decorations down from the attic to see if we could make the place look a bit more festive.

And then Friday hit, when everything was waylaid due to some urgent work issues, which is why I have spent the bulk of the day camped out on a conference call. Thankfully I could at least be doing it from home, still in comfy sweats and with some knitting in hand when I didn’t need to be actively involved in the discussion, but by the time the thing wrapped up, it was too dark outside to do any exterior decorating, and any desire, or energy, to spend hours in the kitchen had pretty much gone out the window.

So instead we ordered pizza for dinner (and then got to chase down Sherman, who snuck out the door, sigh), and Richard poked at the Holidailies site (new functionality on the My Profile page, for those of you participating, plus a bunch of cleanup to the participants list, and the return of the entry count), and we watched an episode of the very first season of Great British Bake Off (because I may have developed an unhealthy obsession with BBC competition shows lately), and then I decided by golly, I ought to attempt to do something vaguely festive to the house, and as any home canner knows, if you’ve been canning long enough you start to collect an awful lot of jar rings, so I made myself a slightly lopsided wreath. 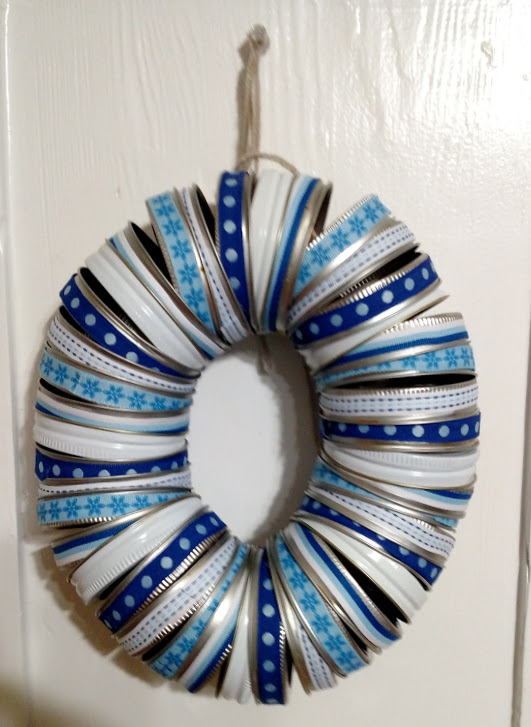 This is one of those craft projects where I had the idea and then Googled it because it was so obvious I knew someone else had to have already done it, and I read various blog posts and thought, wow, this is so simple even *I* can do it. And all the while I was merrily gluing ribbon to the lids, I kept saying ‘wow, this really is easy’. And that continued until I actually tried to shape the thing at the end.

There is yarn involved. Also cardboard. Also swearing. Clearly we were just destined to have a vaguely egg-shaped wreath. Fine. I don’t care. It’s pretty, and it used up a teeny tiny fraction of the bazillion extra rings that are lurking in boxes in the canning closet. I am not going to bother telling you directions because I am not sure what else you need to know except ‘glue ribbon to lids’ and ‘see if you can keep the cats from stealing the glue sticks’, and ‘tie into a circle and then hope for the best.’

I admit I was awfully tempted to make ‘how to craft a clever wreath out of canning lids’ today’s nifty thing, but I’m not quite that lazy. So instead I shall point you this rather awesome interactive graphic from xkcd.