Today is December 1st, which means that once again it’s time for Holidailies. Yay! This is its sixteenth year, which means it’s old enough to get a drivers permit and lurk on whatever the popular social media site for teenagers is and roll its eyes and talk smack about its parents. And now I think I’ve 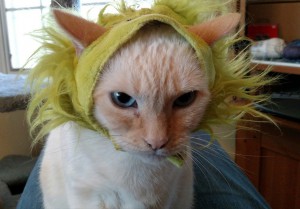 milked that metaphor wayyyy longer than was necessary. Here. Have a picture of Nutmeg in a Grinch hat and let’s pretend this paragraph never happened.

I already talked about this back in October, but for those of you who are new to my little corner of the internets, Richard and I are now your official Holidailies hosts, and we’re going to be spending the next few weeks holding our breath and crossing our fingers that the newly revamped site plays nicely with others. The beta test in October went as well as can be expected, in that nothing major came up, so we thought we were all set, until I came home from rehearsal fairly late last night and it suddenly occurred to me that we had never actually created a new ‘About’ page, or pulled in all the archived participant lists from previous years, and the Blog Badges hadn’t been uploaded, and the random writing prompt functionality was still in hiding, and, and, and….well, all of this is to say that I was up until after midnight last night doing as much as I could, and meanwhile sending Richard a string of emails consisting of lists of stuff we really ought to have done, so he’d see them all first thing this morning when he got up. Shockingly, he was not nearly as excited about all the extra work I came up with for him to do as I was (hah). That could have been because he wasn’t fully caffeinated when he sat down and saw the flurry of emails I sent him the night before, but more likely it was because my contribution to the cause this morning was to say ‘uh…I sent you some emails and I updated a bunch of files and I hope I didn’t break anything, bye!’ as I was dashing out the door far too early in the morning for a meeting down in Menlo Park at the Facebook campus (which, by the way, made me more than a bit nostalgic for the good old days of software consulting, well, except for the long hours and 100% travel, but I digress).

Anyway. I think we’ve now mostly gotten the majority of the ‘holy crap I can’t believe we didn’t think about…’ list I have been obsessively compiling all day, and anything that’s left isn’t (hopefully) urgent, so, uh, welcome to the thing I do every December! If you feel like joining in, go register.

« The hook
Where the wild things are »

« The hook
Where the wild things are »