So technically the test knit I’m working on was due back to the company today…and if all had gone as planned, it would have been merrily winging its way back to them earlier this week. But alas, I discovered that I did not actually get enough of one color of yarn to finish it off, so they shipped more out to me, and it arrived yesterday in the mail. After knitting rabidly on it all morning, and then all afternoon and evening after we got back from a family gathering, it’s finally done. Yay! There were celebratory Mint Milano cookies consumed, and now all that is left is to block it and then weave in a bazillion ends and then add the //redacted because this is a test knit and thus is secret// and hopefully (all digits crossed) this will pop into the mail Monday and be out of my hair for good.

No worries though – the yarn for the next test knit is already sitting on my dining room table, plus I’ve got…uh…an embarrassingly large number of works in progress that I really ought to be poking at, so it’s not like I’m going to be bored or anything.

This morning there was a rather jarring high-pitched screeching noise at roughly 5:30 am. Turns out it was the fan, giving its death scream.

Richard turned the fan off and promptly went back to sleep because he is lucky that way, but alas, that was it for my brain. So instead of lying there in bed, wide-awake and grumpy, I decided it was better to just get up and drink coffee and do something productive, like make a snowflake. 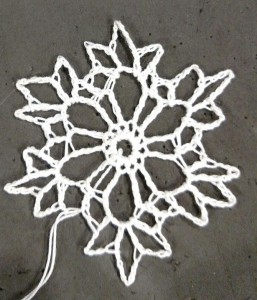 It appears we are now done with clusters and have moved on to open points. I’m kind of sad about that because clusters were actually kind of fun.

« There is no yarn in space
Technicality »

« There is no yarn in space
Technicality »