We had some friends over for dinner tonight, and we played Pandemic. I’ve been wanting to give that game another try for a while, but just haven’t had the time to schedule it. Today was supposed to be spent finishing off a Call of Cthulhu game we all started months and months ago, but life has a way of throwing up roadblocks, so when half the party couldn’t make it, we decided to just do dinner and Pandemic instead.

Our first game ended in a miserable failure. We only managed to get one cure completed, before outbreaks took over and we were all doomed. We took a break for pizza fondue and chatting, and then decided to try it again, this time deliberately picking our roles as opposed to randomly selecting them from the deck. The second time around we were *so* close! Not only did we manage to both cure and eradicate one disease, but we had all the cards lined up for the remaining three cures (and to win the game, all you have to do is have all the cures)….and then we realized we were going to run out of player cards two turns short.

By this time it was late and we were all getting a bit punchy and then someone came up with An Idea. Richard scoured the rules, but there isn’t anything in there about a player (or in this case, two players) deciding to skip their turn, so we worked it out so that we actually *did* get the fourth cure on the very final play of the game….but we all knew it was winning on a technicality.

Ah well. Some day we are going to play this again and manage an actual win. Some day.

We were scurrying around this morning doing a bunch of errands but I did manage to pin out the test knit in the spare room so it can dry, unmolested. Alas, for our cool spring weather, it is not yet dry, which means it’s not going to get into the mail tomorrow like I’d hoped. Bah.

I also whipped up today’s snowflake. Open points *plus* oodles of picots. 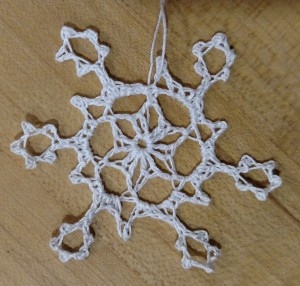 Boy do those crochet designers really like their picots.