This morning I made sandwich rolls (I make a couple dozen every few weeks and keep them in the freezer) and finished the eclairs.

I know that doesn’t sound like much, except that those two things took me ALL morning. Phase 1 of the sandwich rolls requires mixing up oats and butter and brown sugar in a big bowl with water to soak, so I set that up and then ran off to the store to pick up all the things I didn’t have for the pastry cream. As soon as I got back home, I tossed the yeast into the bowl with the oat mixture for the rolls, and separated egg yolks from egg whites for the pastry cream, and then after whisking the yolks into some sugar and cornstarch, I added in all the flour for the rolls and got that all kneaded and set up in the dough bucket to rise, and then it was back to the pastry cream, which required constant stirring, because of *course* it did.

And then when *that* was in the fridge I went and made a snowflake, before turning the leftover egg whites into a late breakfast for Richard and I, and then it was time to form the rolls, and while they were rising I worked on laundry, and chopped up chocolate for the glaze. Next the rolls had to go into the oven (thank goodness for the convection setting on the oven, because at least that way I can do all three pans of them at once), and while they were baking, I had just enough time to pipe the filling into the eclairs and dip them in the glaze and then throw them into the freezer for about 5 minutes (primarily to force the glaze to set so it wouldn’t make a huge mess in the car) and then I yanked the rolls out of the oven and dumped them onto some tea towels to cool on the kitchen counter, before heading out, a dozen eclairs in hand, for my meeting. Phew. 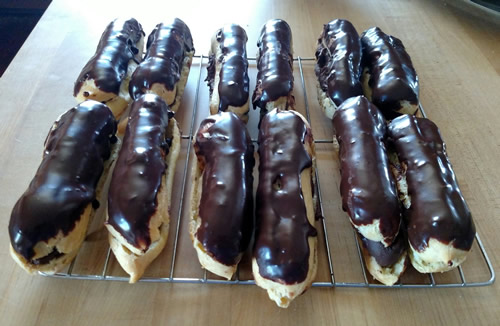 They turned out delicious, by the way, in case you were wondering (and I am sure you were). I’ve made cream puffs a ton of times in the past but this is the first time I’ve done eclairs, I think. Would definitely make them again.

There are seven points on today’s snowflake. *That* was a joy to try to pin out evenly. Also, look, it’s the return of the little ghost-points! 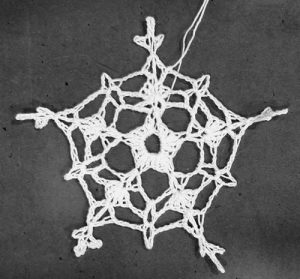