I’ve seen people mentioning Santa Clarita Diet on Facebook but didn’t know anything about it until my parents mentioned that it had to do with zombies. Naturally my ears perked up because, well, zombies! So this evening we decided to give the first episode a try during dinner.

Four episodes later, we’re hooked. I know the zombie thing is so last year, but shockingly, someone came up with something entirely new to do with the zombie genre for this show. It’s absolutely hysterical.

My enthusiasm for picots was never high to begin with. It is even less so after today’s snowflake (Snowflake #34 in the book).

Picots. So very many picots. Shudder. 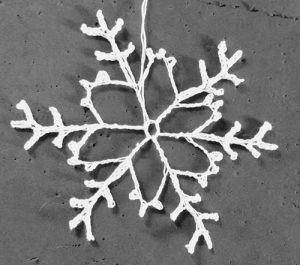