I shall name them all Casper

Today was the annual Free Museum Day in Sacramento, which means we browsed through the list and looked for one that was least likely to be swarmed. Last year we missed it, for some reason or another (who knows) but the year before we checked out the Medical History Museum. Figuring that was a good theme, this year we decided to give the Pharmacy Museum a try.

Much like the Medical History Museum, the Pharmacy museum is hidden away in an unassuming office park. It is, in fact, not actually ever open to the public the rest of the year (without an appointment).

It was quite interesting and a sobering reminder of just how recent so many medications we take for grated actually became available.

There have been a number of snowflakes so far where I start it, get a little way into it, and then cannot make heads or tails of the next instructions, so I set it down and wander away from it for a while to give my brain a rest, and then once I finally pick it back up, it makes (vaguely) more sense.

This one took two rounds of ‘what the heck are they talking about’, and for the first time since starting the snowflake saga (including last year), I actually pondered skipping this one and just going on to the next one. 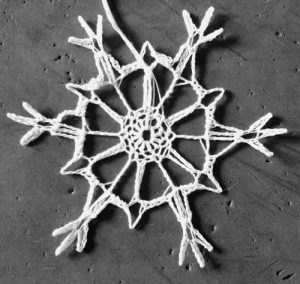 Thankfully I did not, because I rather like how it turned out, and not just because all the main points look a lot like tiny little ghosts waving their arms in the air and yelling ‘boo’.

(And now you’re giving it a closer look, aren’t you. You’re welcome.)

This snowflake also has the honor of being (so far) the only snowflake in the book that requires you to break the yarn in the middle and rejoin it, resulting in twice as many stupid ends to weave in (astute readers may note from the pictures that the end-weaving-in hasn’t happened yet for any of the snowflakes I’ve made (uh…including the 29 I made last year – shhh) because I am leaving *that* loathsome chore for a much, much later date).