There weren’t any food-related National Days for yesterday. I suppose I could have made one up, but Mondays are notoriously busy for me, what with work and rehearsal, so I decided I’d just skip it instead. Ah well. Today sort of makes up for it, though, because you’re getting two Things instead of just one!

First, today is Shrove Tuesday, which is apparently when Episcopalians eat pancakes for some reason. I hadn’t included this in my plan for the month, but when Richard, who happens to be an Episcopalian, informed me, I shrugged and said, sure, let’s do pancakes for breakfast, twist my arm. So I made an oven pancake, which is basically just a slightly eggier pancake batter, that’s cooked all at once in a skillet in the oven. The result is a slightly puffed ‘pan cake’, that you can then just slice up and serve with whatever toppings you are in the mood for. 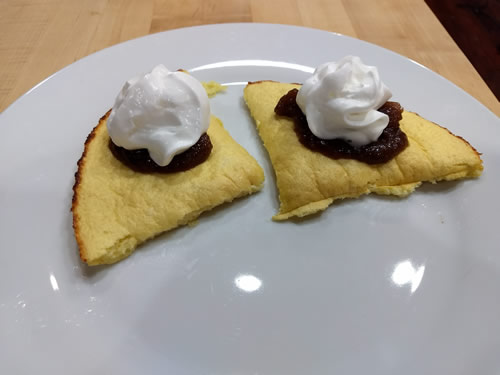 We had ours with some of my home canned apple butter, and a dollop of whipped cream, since that seemed appropriate somehow.

More importantly, though, today is Tortellini Day. I admit there was a small part of me that initially pondered just buying tortellini at the store and having my Thing be the recipe that incorporated it. But making fresh pasta has been on my list of of things to do for a while, and Tortellini Day happened to fall on a night when neither of us had anything planned. So tonight, we made tortellini. From scratch.

We have a pasta roller, but it hadn’t ever been used and needed to be washed, so instead I just rolled the dough out by hand on the kitchen island. Once the dough was rolled as thin as I could get it (not quite as thin as if I was making strudel, but thin enough), I used my largest ring cutter to cut out circles, and then put a small dollop of filling (a mix of cheese and herbs) in the center of each. 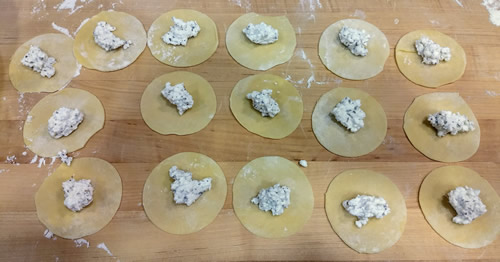 Next they get folded over and shaped. The majority went onto a sheet pan to be dried and then frozen for later, because if one is going to go through the process of making pasta from scratch, one ought to make enough for more than a single meal. 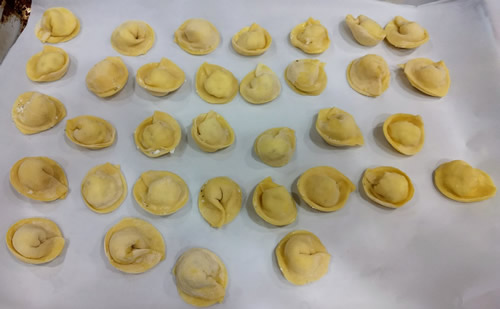 But the first set got tossed immediately into some boiling water. Five minutes later, they were cooked, and shockingly, not a single one unfolded, or otherwise sprung a leak in the water. 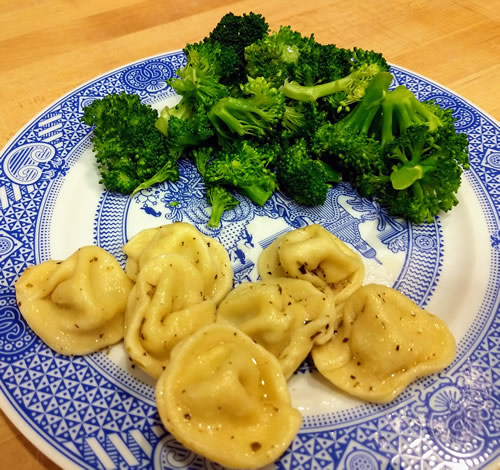 We had them with a simple herb butter sauce, and a side of steamed broccoli, and they were quite tasty. The entire process took far less time than I had feared (even with having to roll the dough out by hand), and was far easier than I had anticipated. So I think it’s safe to say we’ll be making fresh pasta again in the very near future.

« Minty
It’s the thought that counts »

« Minty
It’s the thought that counts »