It’s the thought that counts

Today is Valentine’s Day, if you’re the type that celebrates it. Richard and I decided early on in our relationship that we weren’t really into it (this encapsulates our thoughts on the matter perfectly), but well, we now live with someone who’s a bit of a romantic at heart (or at least, he was), so we knew we had to make at least some attempt. And it is traditional to gift chocolates on Valentine’s Day…..

…so it’s convenient that today is also Cream Filled Chocolate Day (seriously, who comes up with these things??). Of course, we don’t actually own any candy molds. But we *do* own a small selection of strange and unusual silicon molds for ice and/or cake, so those would have to do.

Making candies is fairly straightforward. You melt some chocolate, pour it into your mold, then pour it *out* again, making sure all the sides are well coated. Then you stick that into the fridge to chill, while you make your fillings.

Richard wanted peanut butter. I wanted something that satisfied the ‘cream-filled’ part of the equation. Plus there was still some ganache left from Saturday that I wanted to try to use up. I found this recipe after a quick search of the internets (you can find pretty much *anything* on the internets!), so we were both set.

And what molds did we pick to use? Why, brains, of course! 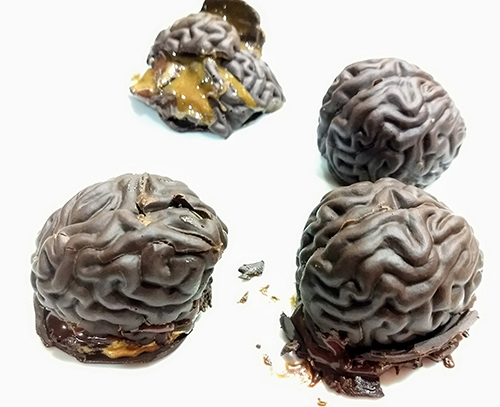 They’re a little big for chocolate candies, and also I suspect we didn’t let them chill long enough to account for the size, which is why one of the coffee cream ones had a catastrophic blow-out as I was unmolding it.

I attempted to do a layering effect with the peanut butter ones, but I’m not sure how successful that was. Also, the chocolate ganache kind of melted with the coffee cream.

But the intended recipient was thrilled, even if they didn’t turn out perfectly. 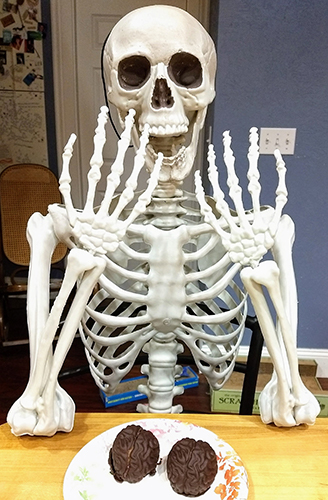 Verdict: I thought they were a bit too sweet, but Richard loved them. Might try making candies again, at some distant future time, but only if I have much smaller molds, and some different filling options.