Today is National Gumdrop Day. Are you as thrilled as I am? Or not?

So….following the directions (which I’m not going to link here for reasons which will become clear shortly), I first cooked sugar and corn syrup until it reached the softball stage, meanwhile also cooking pectin, orange juice, and a little baking soda until it was all foamy. Then I mixed the two pans together and added a little food coloring so they would actually look like the orange flavor, and poured that into a pan to set, and stuffed it in the fridge to chill, and went on my merry way.

When I got back tonight, we unmolded the candy onto a cutting board and I cut off a small piece and handed it to Richard to try. He made a face. Sour. Hmm. Okay. Well, gumdrops are typically rolled in sugar, so I did that next, with a dozen or so pieces. 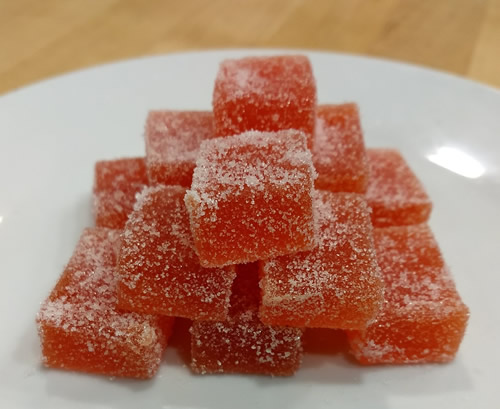 And then we both tried one. The look on Richard’s face made me laugh hysterically, only because it was likely mirrored on mine. So in case it wasn’t obvious, the reason I haven’t bothered to link any recipe is because these things are *nasty*. The texture was off-putting, the flavor was off-putting; really, there wasn’t any redeeming quality about them at all except that visually, they at least *look* like a gum drop.

Ah well. They can’t all be winners. Tomorrow’s Thing will hopefully end up a lot tastier.

« It’s the thought that counts
Dark »

« It’s the thought that counts
Dark »