The bargain we make

It was almost twenty years ago, in the fall of 1999. I was no longer officially fostering with the Yolo County SPCA, although I had been known to take in a kitten here and there when one crossed my path (it’s how I ended up with Rosemary, after all). I was meeting up with some friends who were still heavily involved with the fostering, and we were in the back room at the clinic. One of them opened a cage door and this tiny little black puffball of a kitten launched himself out of the cage, straight at me. As I scrambled to catch him, one of my friends noted idly that he really needed a home.

They told me his story. He had been run over by a car and then surrendered to the shelter by his previous owners due to his injuries. One of his back legs was crushed. The vet – a rather crusty older guy – noted that he really should have just removed the leg entirely, but on a whim, he decided to see if he could save it. So by the time i met him, he was mostly recovered, but just sporting a limp, and a pin in his leg to keep everything straight while he healed.

I pondered. Rosie was the youngest and really needed someone to play with. I said I’d agree to foster him, but only if he and Rosie got along. They agreed to play along with the pretense that he was only going to be temporary, and I took him home. I named him Azrael, after the Angel of Death, because with his injuries he really shouldn’t have survived. Naturally he and Rosie got along famously, and it wasn’t long before he wore down all the others. Clearly he was staying. 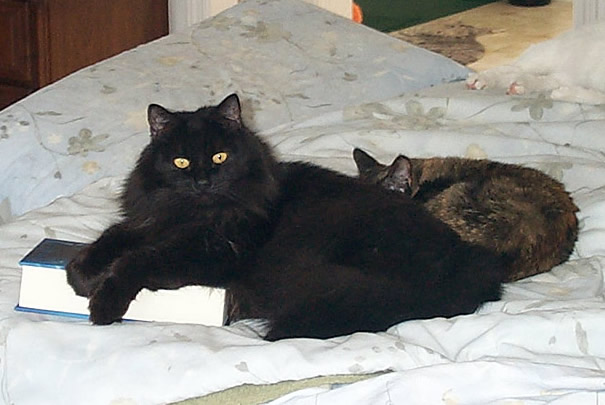 He grew up to be a black puffball of an adult, with huge round yellow eyes. He looked a lot like Nermal from the Garfield cartoons, except that unlike Nermal, Azzie was not smart. In fact, he was probably the dimmest cat I’ve ever known. He once got himself lost behind a see-through shower curtain. While the other cats all figured out a cat door in a matter of minutes, it took him over a week, and then he would first only go through when one of the others would go through, as if he wasn’t quite sure that it would work just the same. When we moved into the house in Sacramento, every other cat quickly figured out within days that the upstairs bathroom had two doors, and if one was open, they could just go around to the other side to get in, but it took Azzie over a year.

He may not have been the brightest of cats, but his internal clock was strong. He knew that wet food would come at 5pm, every night, so at least an hour or so beforehand he’d started yelling in the kitchen, just in case we had forgotten. 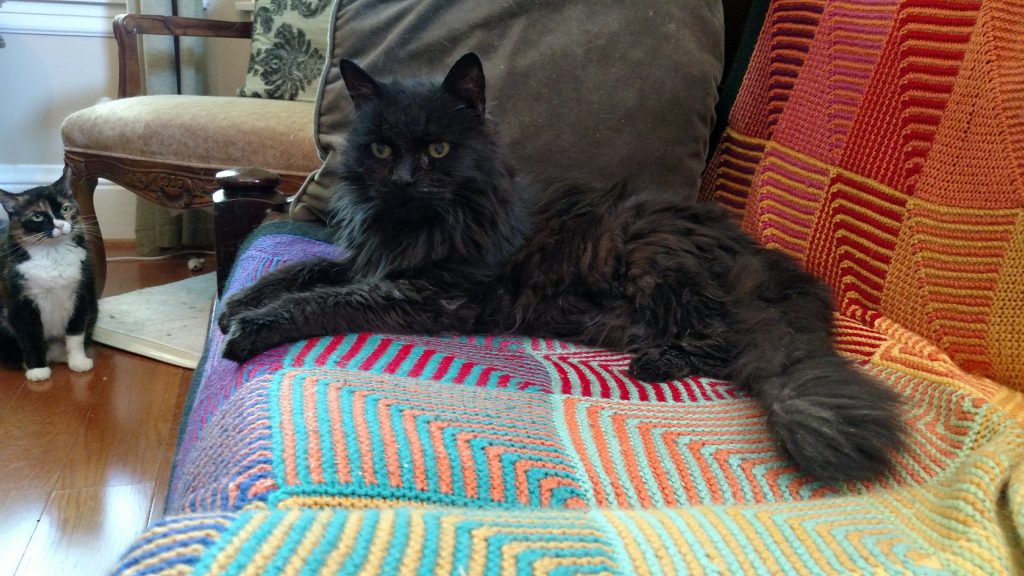 The last year or two he’d been slowing down a lot – arthritis was definitely taking its toll.

And he’d also been dealing with a chronic upper respiratory infection. Initially we’d take him in and they’d give him a shot, or give us some pills, and that would clear it up for a couple months, but lately, nothing was working. 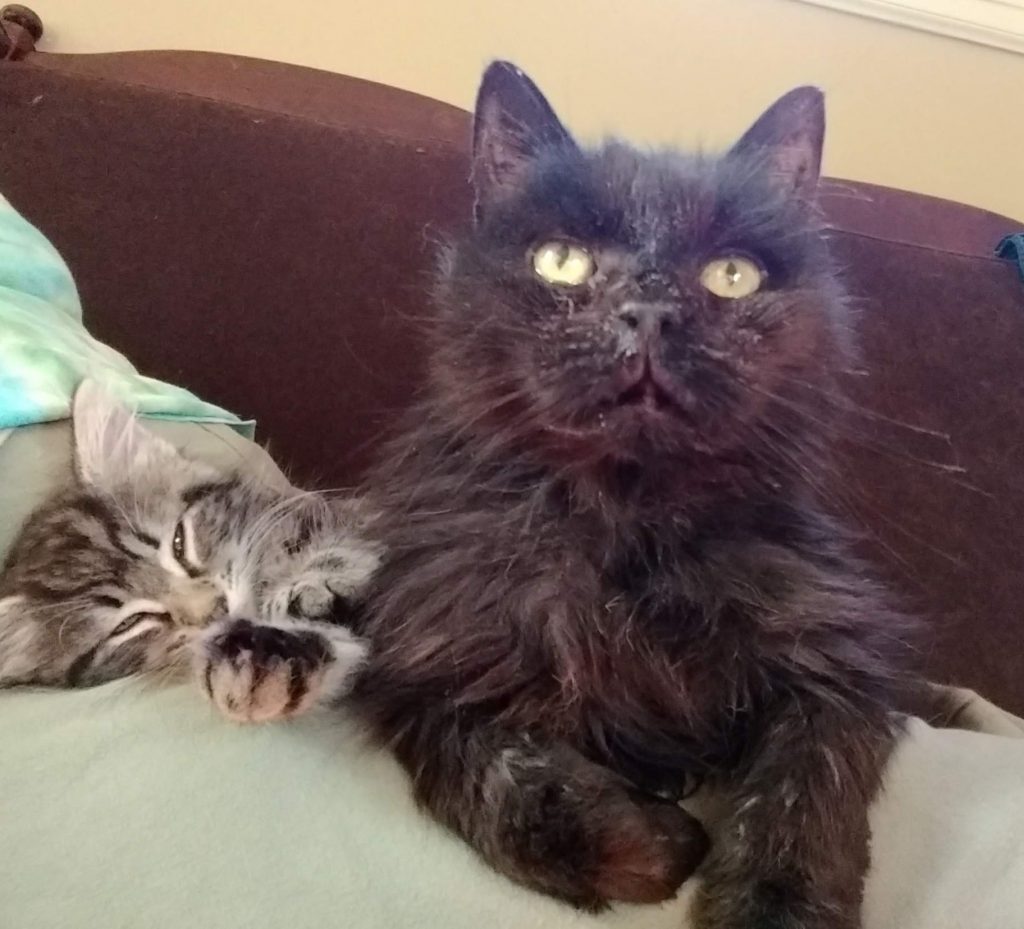 Azzie, from May of this year

He’d lost a few pounds over the past few years, as is normal for elderly cats, but in the past couple months the weight loss had increased. And it took us a little while to come to terms with what we knew we had to do, because through it all he was still coming for food, and able to jump up on the couch, and snuggle up for attention, but it was time.

It is hard, looking at the pictures of him from the past year, to remember what he once was, all wide-eyed and fluffy, skittering around chasing toys and running up and down the cat trees. I sat in the library this morning, watching our current crop of foster kittens charge around the room, and I thought – this is the bargain we make, when we take on these young things, full of life and energy. We let them into our homes and our hearts and they give us love and entertainment and joy, but in return, along with food and water and toys and things to climb and laps to snuggle and warm places to sleep, we also agree that we will make the hardest decision, when the time comes, to let them go.

« When life gives you…Part 3
A month of yellow »

« When life gives you…Part 3
A month of yellow »