A couple recipes over the past week have involved egg yolks but not egg whites. I suppose I could have done something with meringue again, but been there, done that this month. So instead, today I took a couple of those leftover whites and turned them into marshmallows.

Making marshmallows is actually very similar to making meringues, in that you start with a boiling sugar syrup, which is poured slowly into well-beaten egg whites, then whisked until smooth and fluffy. But where things differ is that marshmallows also require gelatin, in order to hold their shape. So instead of juggling two separate things (egg whites in mixer; syrup on stove), you are juggling three (egg whites in mixer, syrup on stove, gelatin soaking in tiny pan). All three eventually come together, and then you pour the whole mess into a foil-lined pan which has been well-sprinkled with powdered sugar and cornstarch. Those sit out to dry overnight (or in my case, all day, since I made them this morning), and then you turn the block out onto a well-sugared board and cut them into pieces. 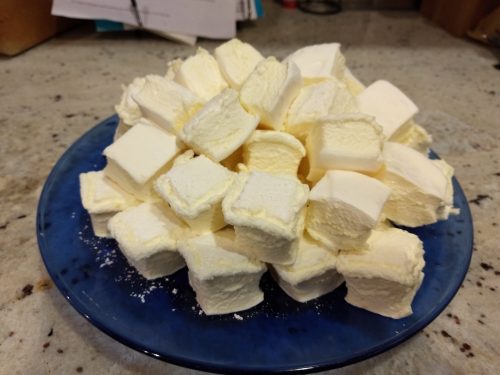 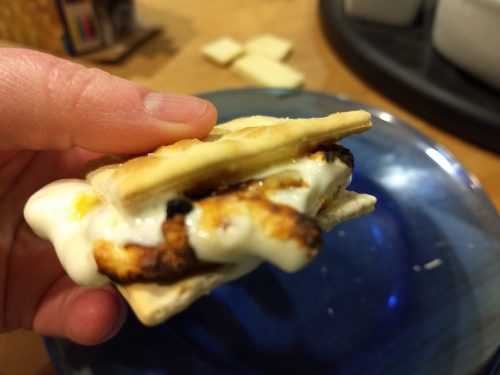 We tried a couple variations, all in the name of science. We used saltines instead of graham crackers, because I figured they would need the little kick of salt. And instead of dark chocolate, we tried two different things: white chocolate, and lemon curd.

The combination of marshmallow, saltines, and lemon curd was a definite hit – as long as we didn’t go overboard with the curd. But the white chocolate just didn’t do it for us. Maybe if the chocolate had melted a little, it might have been better, but… eh, someone else can give that a try.

Oh, and in case you were wondering, homemade marshmallows do not toast up like store bought. They have more of a tendency to just melt, without getting that lovely outer shell that a regular toasted marshmallow achieves when you introduce it to flame, and they do that at much lower levels of heat (which is probably one reason why the white chocolate didn’t melt).

« All things good
A bowl of comfort »

« All things good
A bowl of comfort »