Last night after I got home from rehearsal, I cut up three lemons, juiced them (saving the juice for later), and stuck them in a pan with 2 cups of water, which I brought to a low boil. Then I turned off the heat, stuck a lid on the pan and let it sit for a day, so that it would be ready for this evening’s dinner – Lemon Water Pasta.

The general idea for this pasta is that instead of boiling the noodles in a big vat of water, you instead cook it more like risotto – in a big pan, adding the lemon-infused (and strained) water a little bit at a time until the noodles are done. I ended up having to add another cup of water during the cooking process because the two cups (500 ml) of water just wasn’t enough to cook 8 ounces of spaghetti, despite what the recipe claimed, but eventually it got there. Then at the end, once the pasta’s finally cooked, you stir in a bunch of cheese, to make sort of a sauce.

While I took care of the pasta, Richard set up Roasted Lemon Chili Broccoli (because we needed to use up at least *some* of the lemon juice from those three lemons). 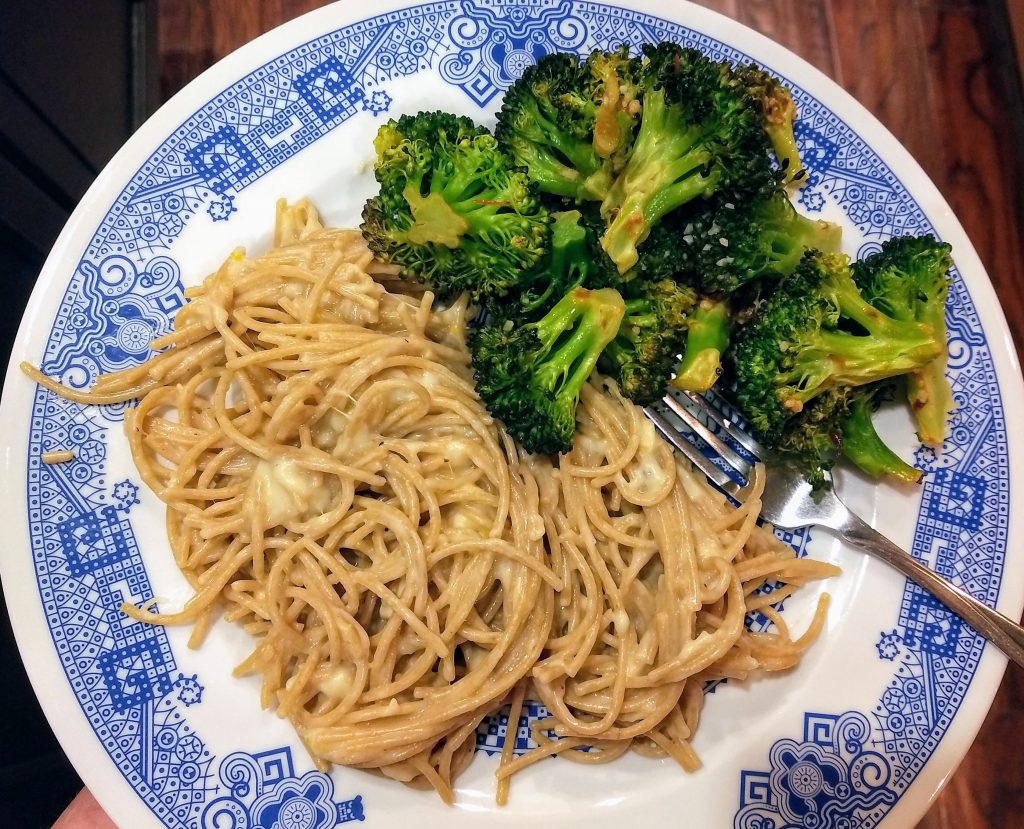 So how were they? Well first, it’s a good thing the pasta was fairly bland, since the broccoli recipe includes three *tablespoons* of chili paste, which is…a lot of chili for the amount of veggies. The pasta itself had a very faint lemon flavor (more of a scent than a flavor) but was otherwise unremarkable. Luckily the two things together mostly cancelled each other out, so it was an acceptable meal (plus, despite what the pasta recipe claims, that was four servings, not two, so there’s leftovers for another day).

The broccoli might be worth trying again, with half the amount of chili paste, but the pasta recipe – eh, probably not. It was an intriguing concept to try but honestly, I think you’d get the same effect by boiling the lemons in the pot with the pasta, then just using some of the pasta water to make a sauce later. Not sure it was worth all the fuss, and I won’t be making it again.