Flush from the success of last year’s Year of Cheese for the #BakingSisters projects (which…I realize I have been sadly lax about blogging, but hey, why should that be any different from anything else I keep forgetting to blog about), we decided to pick a theme for 2020. And thus, 2020 was designated the Year of Rainbows (or color gradients, as the case may be). I foresee the purchase of a lot of food color gel in my immediate future.

The rainbow swirl bread is basically just a regular white bread recipe, with added colors. I used the recipe linked above, but you could easily use your own favorite light-colored bread recipe in its place. You mix up the dough, then divide it into equal size balls (I did five), and mix a color into each of the balls. Note: mixing the color into the dough balls takes far longer than you might expect. Far, farrrrr longer. 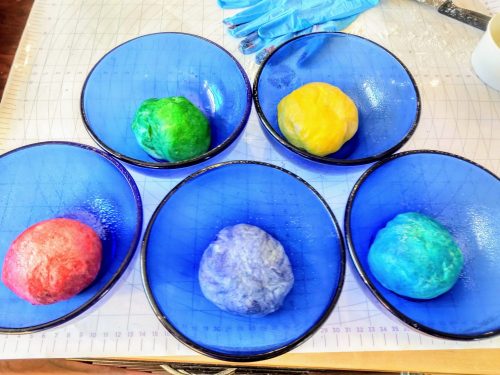 Those are left to rise for about an hour. Then you roll (or carefully press them) into 8″ x 4″ rectangles, and stack them in rainbow order.

Roll that up into a tight spiral 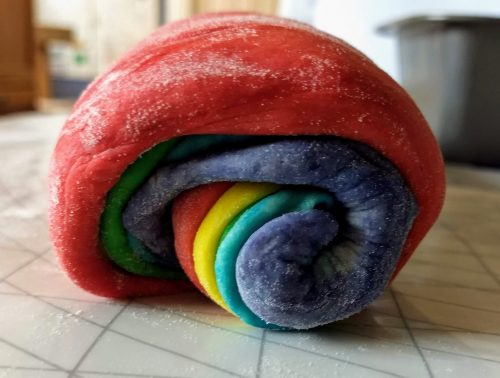 and plop it into a greased bread pan for its second rise.

Once baked and cooled, when you slice it, you get this gorgeous rainbow swirl effect.

I think it’s safe to say our sandwiches for the next week are going to look pretty wild.

Next up was rainbow challah. For some unknown reason I have never made challah before, so I was excited to give this a go.

It starts the same way as the first bread, in that you mix up the dough, then divide it into equal parts (six this time) and work in some food coloring. 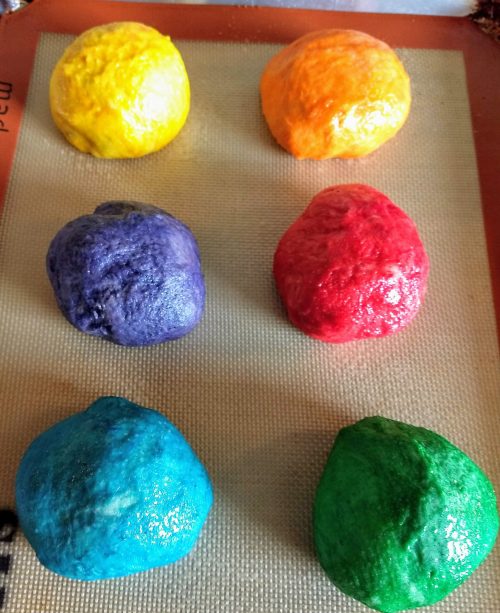 Once that’s had its first rise, then you roll each color into a log and line them up, in rainbow order. 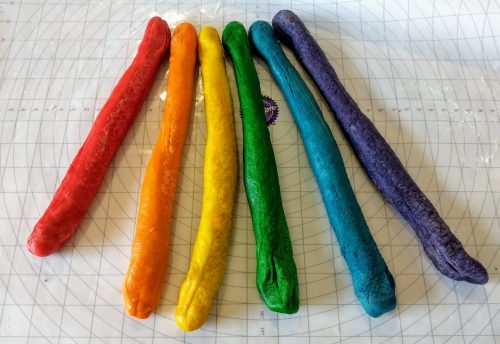 Then comes the fun part – braiding. The recipe link above includes a useful video for how to do this part, and all those bright colors turn into something really gorgeous once it’s all braided up.

After a second rise, it bakes. I was worried about the fact that it didn’t rise very much during either set, but once in the oven, it grew quite a bit.

And here’s an interior shot. 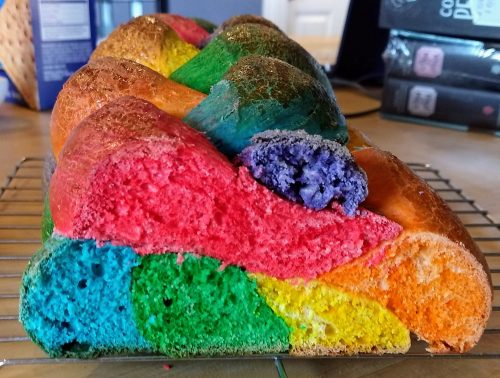 Finally, after all the bread, it was time to do the marshmallows. I’ve made marshmallows before (in fact during one #BakingSisters morning, we made chocolate marshmallow fluff, which was absolutely delightful), but that was always done with egg whites. The recipe I linked above didn’t use egg whites at all, and instead is made solely from gelatin and sugar syrup, whipped until smooth. Then you divide it into one bowl per color used (I did five) and add the food coloring, then stir until well mixed. 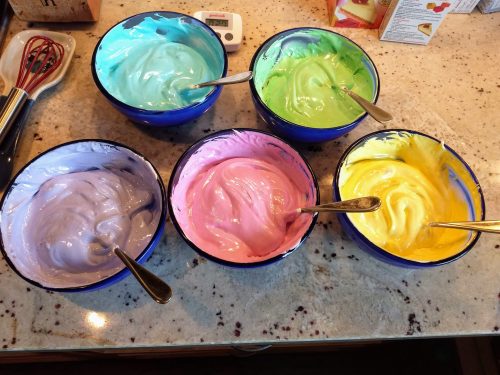 I admit by this point I was a little tired of kneading and mixing colors into things, so I went with a lighter, pastel palette.

Those get layered into a pan that’s been lined with a very thin layer of powdered sugar, and then are set aside to firm up. Did I remember to take a picture of them before I covered the top with powdered sugar? No, no I did not. Ah well. But I did carefully cut out a chunk before they completely set, so you can get an idea of what they look like. 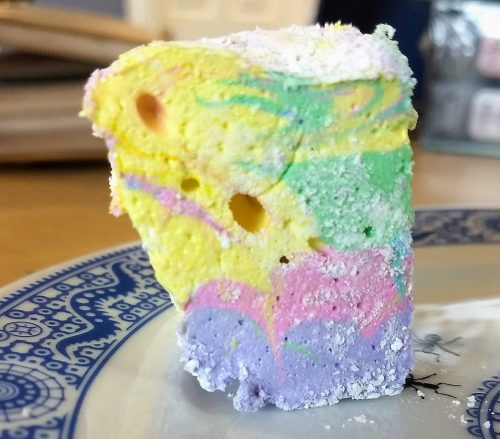 Verdict: Well. They’re marshmallows, with rainbow blotches, and they taste like….marshmallows. Nothing much more to say than that.

« Uninterrupted
The dark of night »

« Uninterrupted
The dark of night »