The dark of night

This has been one hell of a week. There have been multiple visits to hospitals (both people and animal variety) for various emergencies, several expensive repairs (plumbing, electrical, and automotive), and the discovery that our credit card had been hacked so a lengthy process of figuring out which charges were / were not fraud. The house is a disaster zone – there are dust bunnies large enough to gain sentience gathering in corners and suspicious spots on the floors, and every surface is cluttered with stuff that needs to be sorted, or thrown out, or put away, but with everything else going on, tidying has been last on the priority list. It has been the sort of week that culminated in standing in front of the freezer, eating ice cream directly out of the carton at nearly midnight, because that’s the best I could do.

Today is the first day of February, which means it’s also the first day of Thingadailies. Last year I did lemon related things every day, due to our extremely prolific Meyer lemon tree in the backyard. This year I decided to expand that a bit, to just encompass anything citrus, since we still have a pile of tangelos in the fridge, and there are a bazillion mandarins on the tree in the front yard, still waiting to be picked.

I have been looking forward to this, because things have been pretty dark around here lately (politically), and citrus is the sort of flavor that makes you think of spring and hope and new beginnings. So today, in between trips to the emergency vet, and nervous monitoring of a very sick little kitten, and a power outage (where I grimly knit by literal candlelight because my phone was nearly dead and there was nothing else I *could* do) and trying to keep on top of the suspicious hairball stains on the floors, I decided that the best way to kick off the month would be with pie – Lemon Chess Pie, to be exact. I’ve seen recipes for Chess Pie over the years but have never made one (or even tasted one, for that matter), and the concept sounded intriguing. It’s supposed to be a thick, sweet concoction, sort of (I assumed) like a custard or a cheesecake. The filling includes cornmeal, which seems odd to me, but all the recipes I found have it, so sure, why not. Cornmeal it is. 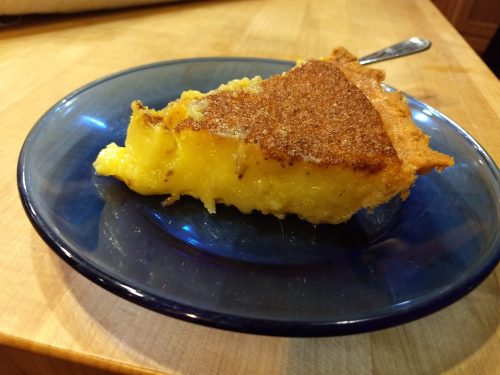 Pie is supposed to comfort food, tucked into a tasty shell, and I desperately needed some of that this evening, coming home at nearly midnight from the second trip today to the emergency vet, where I dropped the sick kitten off to spend the night. But this wasn’t. The cornmeal in the filling gave it an unexpected (not in a good way) gritty texture. The lemon was too sharp, and not bright and soothing at all. The crust was perfectly done but I have no idea if the middle was set to where it was supposed to be, since it seemed a bit looser than I was anticipating, or even if it tasted like a chess pie should. I took a few bites of my piece and then pushed it away, disappointed, and with an unpleasant taste in my mouth.

Sometimes ice cream straight from the carton is the only suitable option, if only to clear the palate of an extremely unpleasant experience. Here’s hoping next week brings healthier family, healthier foster kittens, zero nasty financial surprises, and much better news.