Because the current batch of foster kittens have been so active, we’ve been letting them out in the mornings, to run around the kitchen (thereby doubling their space, and giving us a chance to clean out their room with slightly less kitten ‘assistance’).

This morning I headed around the island to refill my coffee, and looked down to see that two of the kittens were industriously investigating one of yesterday’s lemon muffins. I was baffled at first – I know for a fact that neither of these kittens is big enough to get onto the kitchen counter where the muffins were stored (wrapped and covered and, we thought, safe). It wasn’t until later, when I saw Timmie bounce nonchalantly onto the counter and head straight for the muffins, that I realized what had happened. This was doubly reinforced when she ran off with the remaining whole wheat soda bread. Turns out someone is a bit of a carb fiend. Goofy little cat.

Anyway, back to the citrus things. The few remaining tangelos in the fridge were starting to look a little sad, so I turned the three that remained into pancakes. 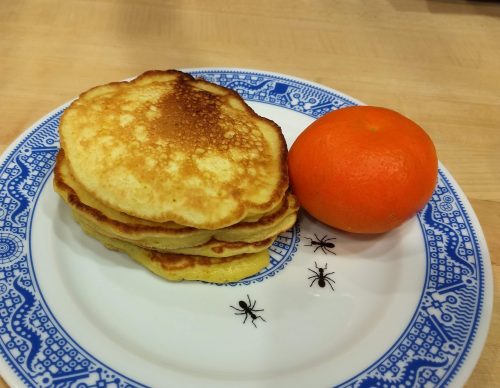 The orange flavor definitely comes through, and they’re nice enough pancakes. I think I prefer a heartier pancake though, so I’m not sure I’d bother with this specific recipe again (although I’d certainly be game to swap out the milk for fresh squeezed tangelo juice in one of our more preferred recipes, next year when they all come ripe again).

Making a thing a day for Thingadailes.