It’s December 1st, which means welcome, once again, to all the folks finding me through Holidailies. This is the 22nd year of Holidailies, and I’ve done it (or at least attempted) every single year, with varying levels of success.

Anyway. I figured I’d kick off the month with a little bit of catch-up from our weekly bakealong for the Great British Baking Show, since while I’ve been doing them on a timely manner, I haven’t actually been *posting* them, so that’s what you’ll be getting for the first week of posts.

First up – Dessert Week. The choices were pavlova (signature challenge), sticky toffee pudding (technical challenge), and a fancy cake with an imprinted jaconde sponge outer layer (showstopper). We’ve made pavlova before and didn’t really want to redo that, and the fancy cake sounded fun but didn’t really fit into our work weeks. No matter – it turns out my sister had never even tasted sticky toffee pudding before (which I found absolutely shocking because it is one of the most delightful desserts you can put into your mouth and when we did our trip to Ireland back in 2006 I made a point of ordering it every where I could, until I was probably composed entirely of sticky toffee pudding by the end). 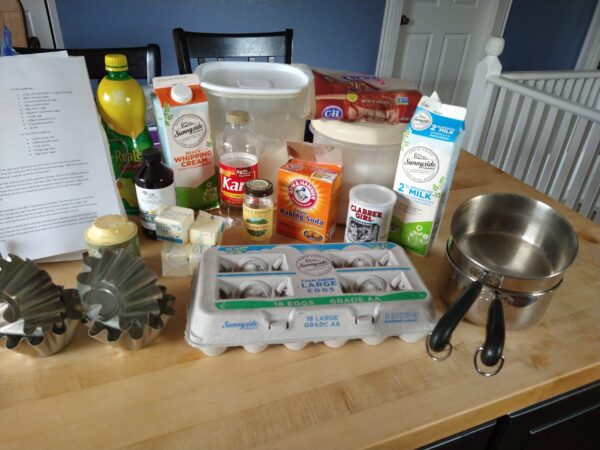 Sticky toffee pudding consists of a very light sponge that’s made with pureed dates, and baked with a caramel layer at the bottom, then served with extra caramel over the top. This being the technical bake, they added a sesame brittle, and a creme anglaise for the top, just to make things more complicated.

I’ve made sticky toffee pudding before, although it’s been a while, and never in tiny little pudding molds, although I scored a set of adorable little tins off a neighbor during an estate sale and have been having fun finding ways to use them ever since, so these fit the recipe perfectly. My caramel went a little weird, and despite what Google may tell you, there is no bringing caramel back once it starts to split.

Sesame brittle is possibly the most boring brittle in the world to eat so seriously, don’t bother if you decide to make this recipe, and neither of us made the creme anglaise because unlike the British, we’re not fans of pouring warm custard all over everything. But the puddings themselves came out perfectly, with a delicate sponge, and even if the caramel was a little on the thin side, it still tasted absolutely delicious.