Episode 5 of the Great British Baking Show was German week (and you would have thought the German contestant Jurgen would have dominated this one, except that he pointed out that he usually doesn’t make this sort of thing, so ah well). The challenge recipes were: two dozen German biscuits (cookies), a Prinzregententorte (which is a layered chocolate torte), and a double-tiered yeasted cake. We were very torn because we actually wanted to make all three of them, except that that was a lot of time and also a lot of cake and cookies for households that only have two people. So instead we compromised and decided to make 1 dozen cookies, and a single tier of yeasted cake.

Off to Google we went, and I chose Kardamon Plaetzchen (Cardamom cookies) dipped in chocolate (since they had to be decorated) and a Bee Sting Cake, which consists of a yeasted dough, sandwiched with a layer of pastry cream and topped with a layer of honeyed almonds.

The cookies turned out quite yummy. You can definitely taste the cardamom, which has a lovely flavor, and while I was worried the chocolate would overpower, it was a good combination.

The bee sting cake was interesting – I’m not sure I’ve done a yeasted cake before, but aside from the rising time, it wasn’t much different than any other cake recipe out there. It’s baked in a springform pan, to allow the dough to rise, since it would otherwise overflow a regular cake pan. The honeyed almonds are spread (carefully) over the top of the cake after it’s risen, before it goes into the oven, which then gives the cake a shiny (although slightly, uh…rustic look) once baked.

It felt like a lot of pastry cream, but in a way, you need the cream to cut the overwhelming sweetness of that topping. 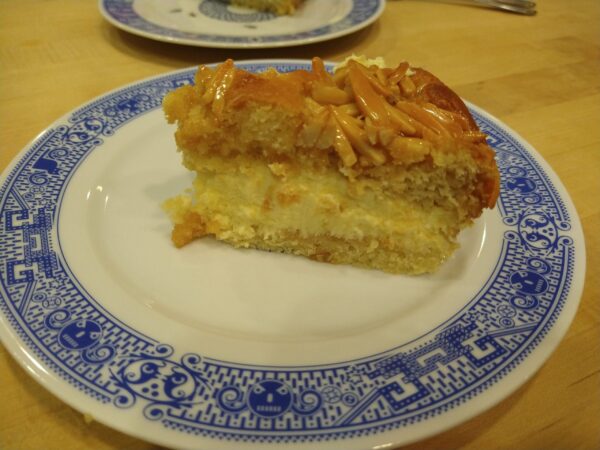 I got both of them done within the time frame required (we just used the cake time requirement because we knew the cookies could be done during the rising time of the cake batter) and they were fun to make. Not sure I’d do the cake again – it was tasty but a little sweet for me, but the cookies could definitely make a reappearance in the future.

« Dainty and delicious
Mars has nothing to worry about »

« Dainty and delicious
Mars has nothing to worry about »