I know, there’s two weeks left of Great British Baking Show still to catch up on, but I’m taking a quick detour to talk about Thanksgiving.

It was just Richard and I for Thanksgiving this year (his family does their big meal gathering the weekend after) so we decided to throw all the traditions out the window and do something different.

Okay, one tradition remained the same. Breakfast is, and always shall be, homemade apple butter cinnamon rolls. 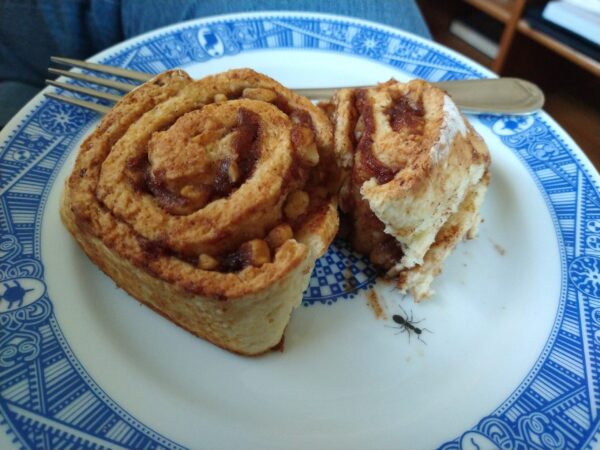 Also I did end up making up a batch of potato dinner rolls, because those are handy to have in the freezer. But instead of spending a ton of time fussing over a ginormous meal for just the two of us, we decided to make a rainbow veggie tart.

This starts with a sheet of puff pastry (store bought, because life is too short to fuss with making your own). Then you take a bunch of vegetables (we used onion, carrot, zucchini, and yellow squash) and peel them into thin strips, and then spiral them into the tart. Underneath those is a layer of pesto and cheese, and the top is brushed with a little olive oil before going into the oven to bake for a very, very long time, until the veggies are all cooked through and the crust is a perfect crisply golden brown. 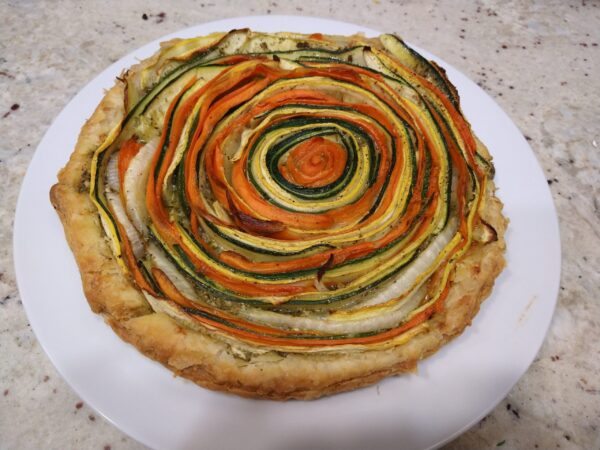 Originally the plan was to do the tart for lunch and do something else for dinner, but we didn’t actually get around to that, so instead we made our original dinner plan the following day: spinach and cheese ravioli.

Making pasta from scratch is actually really easy and it doesn’t take all that much time and I honestly don’t know why we don’t do this a lot more often, which is a thing I say every time we have made pasta in the past (roughly only once a year), so clearly this is not a lesson that is sticking. But anyway! The spinach gets ground up into the dough, which is then kneaded until smooth (which then distributes the green color from the spinach). The filling was just cheese and some lemon zest (from the overly prolific Meyer lemon shrub in our backyard). 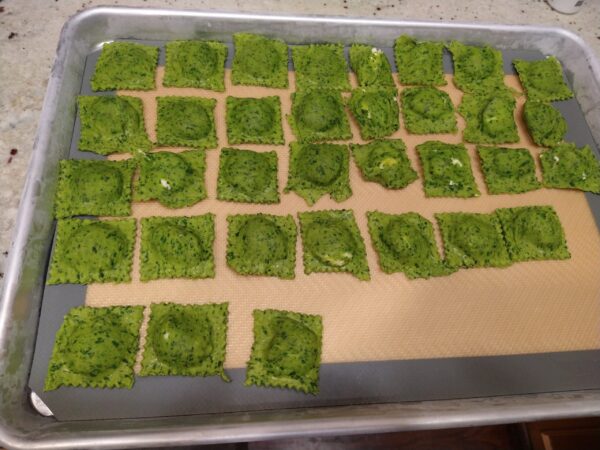 We served it with a little pesto on top, and a couple of my homemade rolls on the side. Plus there’s plenty of extra ravioli stashed in the freezer now, for later dinners. Yum.

« Chilled
Should have been called gelatin week »

« Chilled
Should have been called gelatin week »