Onward to Episode 8: Free From week, which meant that each challenge was free from a different ingredient. The Signature was dairy-free ice cream sandwiches, the Technical was vegan sausage rolls, and the Showstopper was gluten-free cakes. Neither my sister or I was in the mood to tackle a huge cake, and the sausage rolls didn’t sound appealing, so…ice cream sandwiches, it was!

My sister made up her own version because she’s talented like that but I decided to go with Guiseppe’s Ginger Orange Ice Cream Sandwiches, because the ice cream is made with tofu and sounded intriguing. 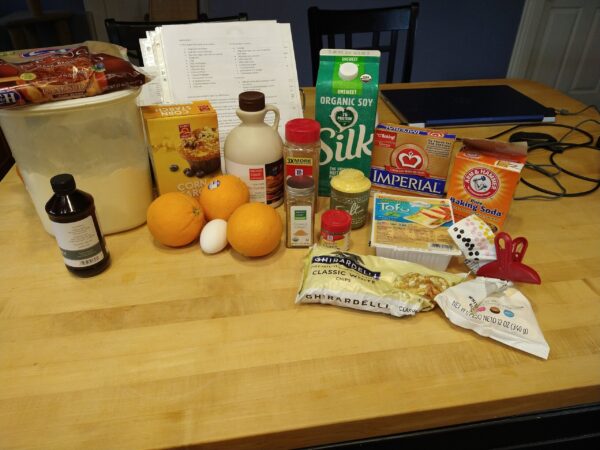 The cookies were pretty straightforward – just a slightly spiced cookie made with margarine instead of butter. The ice cream required orange juice and zest, soy milk, and silken tofu all blended together. This time I planned ahead and stuck the bucket for the ice cream maker in the freezer the day before, and shockingly the ice cream actually churned for a change, instead of just remaining a sad, cold liquid consistency like previous attempts. Hooray!

There were supposed to be candied orange peels on the top for decoration, plus melted white chocolate drizzled for a pattern, but after I assembled them I got busy doing other stuff and almost forgot about them, so ran out of time to do any sort of drizzling, plus orange peels take WAY longer to candy then the recipe says they will, so after a tentative nibble, those went directly into the trash. But at the end of the three hour time limit I had 8 completed ice cream sandwiches, even if the ice cream was a little soft during assembly so it blorped out everywhere. 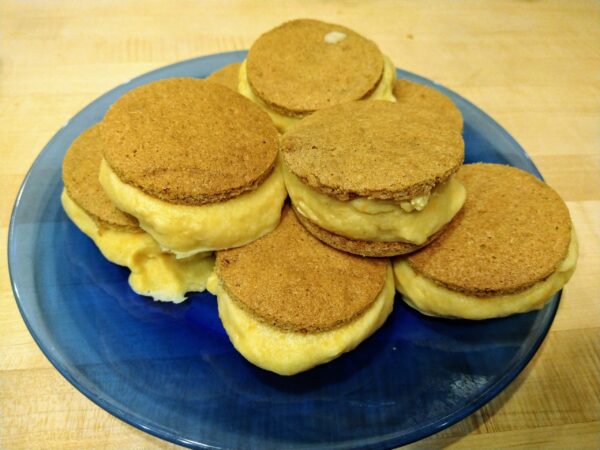 Dairy-free ice cream will never be as creamy or taste as rich as real ice cream, but for what it was, these turned out pretty tasty. I wasn’t sure if the tofu would affect the taste or texture, but honestly, if you didn’t know it was there, you’d never guess. The ice cream has a pleasing orange taste, and the cookies are lightly spiced with ginger and have the consistency you’d expect from an ice cream sandwich, so overall, this was a win.

« Baked in a pie
Eating the rainbow »

« Baked in a pie
Eating the rainbow »