A head of the pizza game

Today was National Pizza Day, so I suppose we could have just made pizza, which we have done oodles of times in the past. But a random Twitter thread a week or so ago had me pondering, because someone mentioned that they had made calzones in their mini skull cake pan. And I thought, hey, *I* have a mini skull cake pan. I should make calzones! Or perhaps I should call them skullzones instead.

I started with our usual pizza dough recipe, then we eyed the contents of the fridge and decided to fill them with some broccoli and some mushrooms. We debated type of sauce – whether to go with a red or a white sauce, so I instead just tossed a little butter and flour into the veggies and made a roux, then stirred in some cheese, and used that as the filling. I divided the dough into six pieces, then rolled each one out and carefully lined the skull pan molds. I filed them, did my best to crimp the tops, then tossed the pan into the oven and hoped for the best. 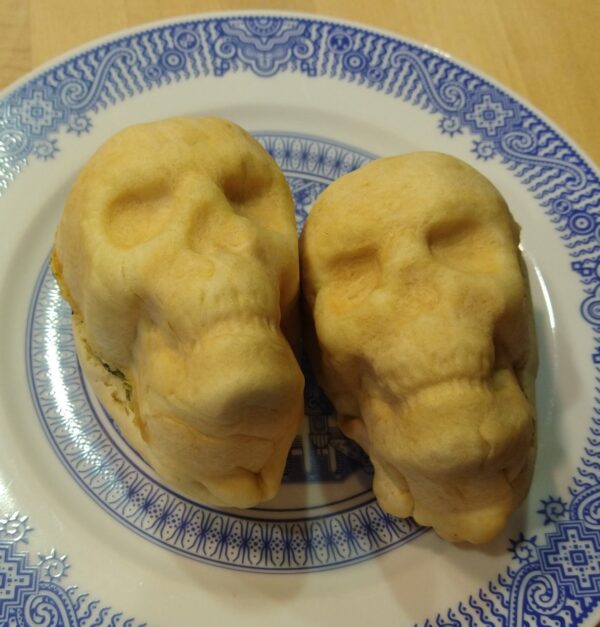 They aren’t perfect – I think next time (because oh yes, there *will* be a next time) I need to use less dough per skull, and perhaps parbake the cough in the molds before adding in the filling, but they were super tasty, and highly amusing, and that’s what counts.