Yesterday we had folks out demolishing concrete and digging big holes in the yard in order to replace our sewer line. This is one of those things that has been on our list to take care for quite a while, so….Merry Christmas to us (we decided it was our joint present, because Adulting), so while listening to the occasional jackhammering, and not being able to flush anything down the drain for a few hours was minorly annoying, it was worth it to finally get it done.

They came back this afternoon to fill in the holes, and at some point later this week they’ll come back again to replace the cement that they had to dig up, but hooray, at least it’s done.

In less expensive news, the Christmas ornaments for this year’s tree theme finally arrived, so this evening we took roughly 90 seconds to decorate. 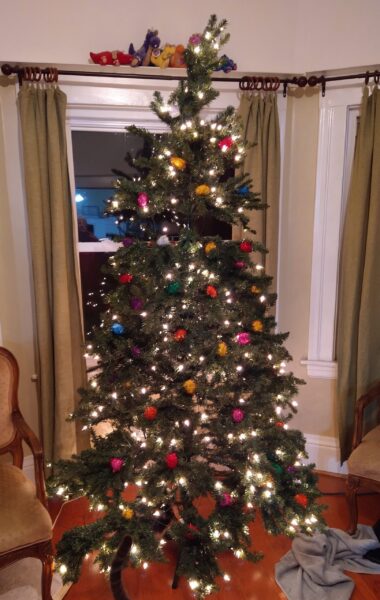 Doesn’t that look festive and lovely?

I know you’re wondering what they are. Here’s a closer look – can you guess? 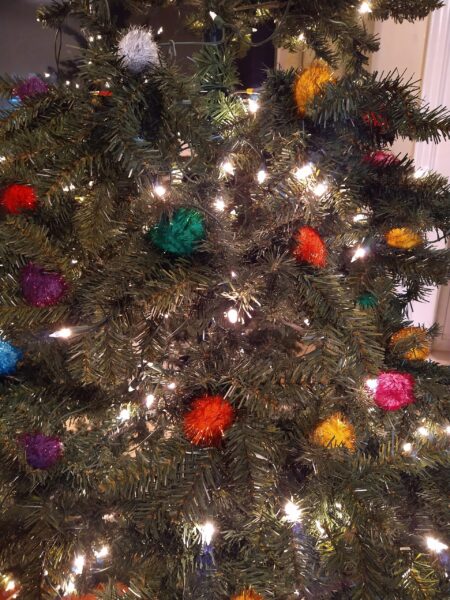 So it turns out you can get a bag of 50 sparkle ball cat toys for less than $10 if you poke around long enough on the internet, and the beauty of using sparkle balls is that they require no hooks for hanging – you can just tuck them into the branches, and when they are (cough) ‘liberated’, you can just gather them up and replace them as you walk by.

It took Guffaw a few minutes to figure out what was going on, but once he realized what they were he was extremely excited, and over the course of the evening he plucked three from the tree and then chased them all over the house until he wore themselves out.

I think this year’s decorating scheme can be considered a qualified success.