For the past few days, my area of California (at least large quantities of it) has been quietly losing its mind.

What’s that, you ask? Some sort of California-related celebration? Or perhaps a veiled reference to a protest of some kind?

No, no, nothing like that. We’re all going ever so slightly insane around here because it is RAINING.

Yes, we’ve all seen rain before. Yes, most of us have all actually *driven* in rain before. But it’s been a very long time since we’ve had rain of this quantity coming in such a short time. And for a state that’s been suffering through a really nasty drought all year, heavy rain is really quite exciting. So we are all flip-flopping madly between OMG it’s raining yay!!! to OMG watch out for the lake-sized puddle AIEEE!

On the down side, a couple days with sudden downpours has led to flooding on surface streets, or worse, on highway on-ramps and off-ramps (leading to all sorts of nasty accidents). Some of the flooding is due to the fact that the storm drains just clog up with some of the bazillion leaves that have been falling from the trees over the past month or so, and some of it is due to the fact that our sewer system is old and badly in need of repair and so just isn’t equipped to handle the volume we’re currently experiencing. Our street in particular flooded completely – something that happens every time we get a whole lot of rain in such a short period, and something that takes a city contraption to clear up. But the city clears streets as quickly and efficiently as they can, and my neighbors and I have gotten used to either parking around the corner on higher ground, or else just climbing into our cars from the passenger (sidewalk) side to escape the water, and it’s an inconvenience we gladly put up with for the fact that at least it’s *raining*.

On the plus side, all that rain means we get some pretty amazing side effects. This afternoon a coworker said ‘come look at the rainbow!’ I hesitated at first – I’ve seen lots of rainbows – but then I looked toward the window and…..wow! Everyone else in the office was having similar reactions – pretty much every single person eventually meandered over to the windows to stare up at the sky.

It was a perfect rainbow. We could see every single band of color as bright as if it had been painted just outside the window. If that wasn’t enough, we could all clearly see that it was an actual, complete rainbow arc, not just half a rainbow like you usually see. And it was close enough that we could actually see the end on one side – the colors washing over the trees and then stopping at the ground. It was incredible. The fact that it was also a perfect double rainbow was just icing on the cake.

This picture does not remotely do it justice, but it’s the best I could manage on my cell phone. 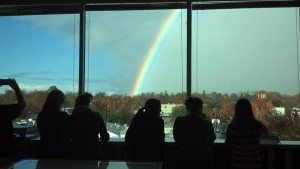 It almost made up for the fact that getting home later on took 3 times as long due to the flooding and the crazy. Almost.

‘Tis the season for Holidailies!

« Making use
The scent of ginger; the screams of the damned »

« Making use
The scent of ginger; the screams of the damned »